Nominate for This Year's Fortnightly Under Forty

Who in your shop is on the fast track? Who is up-and-coming? It’s that time of the year again, time to nominate these young guns for the Fortnightly Under Forty to be featured in the June 2020 issue of Public Utilities Fortnightly. 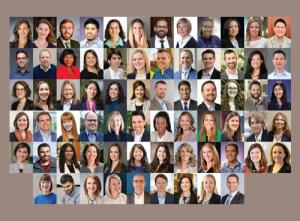 Nominations are due as usual by Albert Einstein’s Birthday, March 14, pi-day. That’s a month from today so get going on this. Write no more than five hundred words on why your Einstein is destined for success in the utilities industry, including in utility regulation, and send those words to Alexandra Revel, arevel@fortnightly.com.

The following is excerpted from the Fortnightly Under Forty feature in the June 2019 issue of Public Utilities Fortnightly:

There’s everywhere now. They’re in our meetings. They’re on our teams. They’re at our conferences.

Not only that, there’s more of them every day. Once a rarity, now some lead the discussion. Or lead the division.

More than a few are razor sharp. And inexplicably prescient about where we’re heading, especially in all things tech and data.

Their differences with our generation can seem stark. These aren’t three-piece suits. But we are getting used to their ways. And they to ours I suppose.

You know who I mean. The next generation of up-and-comers in the utilities industry. The young people that we’re integrating into our organizations, to whom we’ll soon hand over the keys to the grid and regulatory systems.

By Albert Einstein’s Birthday, March 14, pi-day, we asked you to nominate stars at your utility, commission or company who, while not yet forty years of age, are deserving of being celebrated and having the recognition of the Fortnightly Under Forty this spring. (Einstein was just twenty-six when he discovered the photoelectric effect laying the foundation for solar power generation.) You responded in earnest. We finalized a list of seventy-six distinguished Under Fortys that are celebrated herein.

Of the seventy-six Under Fortys, forty-four are women and thirty-two are men. Notably, that’s fifty-eight percent women. Not what we would have expected if we had done a Fortnightly Under Forty twenty years ago, or ten years ago, or perhaps just five years ago.

There are five Under Fortys from Ameren and the Electric Power Research Institute. And there are four Under Forty’s from Eversource, Hawaiian Electric Industries and Southern California Edison.

All seventy-six are worthy of our admiration. All seventy-six are impressive. Check out, for example, the accomplishments already in their short careers of Buckeye Power’s Bethany Schunn, Exelon’s Jaclyn Cantler, Florida’s Commissioner Andrew Fay, Hawaiian Electric’s Marc Asano, and NYPA’s Patricia Lombardi.