Steve Mitnick: We couldn't help seeing that Chair Pai of the Federal Communications Commission said he's going to retire. I guess that's a natural thing with changes in the Administration. But, he had a lot to do with our industry’s push for 900 megahertz private broadband networks. 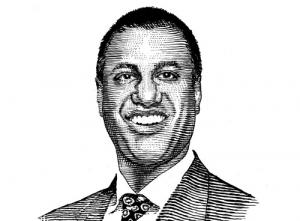 Chris McCabe, from Anterix: Absolutely. Chairman Pai was instrumental. He and his staff, and the whole team at the Commission. We were equally excited that this was very bipartisan. Chairman Pai and his team really led the effort, but we had support and help from the other four Commissioners and their offices as well.

I think they all recognized that this was a unique opportunity to bring a very scarce asset to market and to repurpose it for modern use. We saw a great Report & Order come out of the Commission that protected incumbents, particularly the incumbents that have these complex systems. It made sure that there was a really good balance between moving forward with broadband, but protecting those incumbents that are already operating in the band.

Steve Mitnick: What excited me about what the FCC did was that this is kind of a bulletproof vest against cyber threats, which is such a big priority for our industry.

Chris McCabe: I think you're spot on, the desire to fuel private broadband networks and all of the benefits that come with private networks. Including cybersecurity. Where you can detach a network from the public Internet and the vulnerabilities that can come through the public Internet…

I do think it was all of the above that spurred the FCC to act. First, the need of the critical infrastructure, and utilities’ need. Second, the unique nature of this new 900 megahertz spectrum, and its ability to really fuel a build-out. And third, the opportunity to accelerate the deployment of private networks. I think those are three of the key rationale that were embraced by the Chairman Pai and the other Commissioners. Following this historic development at the FCC, the utility sector is recognizing, I believe, the value and timing of this scarce spectrum becoming available to it.