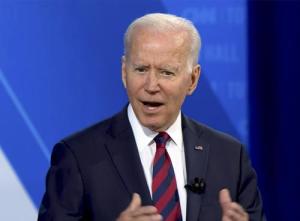 Turned on the TV last Thursday night while doing the dishes. Well, to be precise, nobody turns on the TV anymore, as we did before remotes when you rotated the on-off-volume knob. But you get the idea.

And who was on CNN but President Biden. He was doing one of those town halls. It was hardly as spontaneous as a colonial New England town meeting. But POTUS did take some tough questions from the audience.

My jaw dropped to the floor when Joe, while answering a question about the climate change provisions of his legislative initiatives, argued out of the blue for undergrounding electric lines. I immediately thought, sure, selective undergrounding is increasingly being considered within our industry. I never figured though it would rise to a White House priority.

“Nothing has been formally agreed to. The concession has been — the negotiation is I’ve been saying to [U.S. Senator Joe Manchin of West Virginia], look, I’ll take — if we don’t do it in terms of the electric grid piece, what we’ll do is give me that one hundred and fifty billion dollars. I’m going to add it to be able to do other things, that don’t directly affect the electric grid in the way that there’s a penalty, but allow me to spend the money to set new technologies in place.

It creates a hell of a lot more to do it. But in fact, it would do a lot to keep things from happening that are dangerous. Half the forest fires out west are those towers coming down setting fires, etc.”

It’s not just the President that’s looking at the benefits of selective undergrounding. Our annual special issue of Public Utilities Fortnightly on innovation, published a couple of days ago, features twenty-three pages on undergrounding. Including the accomplishments of Dominion Energy, Florida Power & Light, Pepco, Southern California Edison, and TECO Energy.