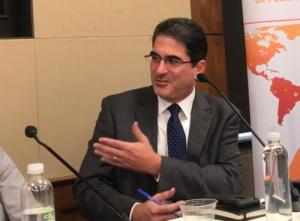 Tomás Torres spoke at the Puerto Rico Energy Redesign Forum on Friday, October 27, Rayburn Building, Washington, D.C. Torres currently serves as Project Director in the Aireko Foundation and as General Coordinator of the Institute of Competitiveness and Economic Sustainability of Puerto Rico (ICSE-PR). Torres is a licensed engineer with over twenty-five years of experience. He is a former member of the Puerto Rico Planning Board. He chairs the Energy Committee at the Puerto Rico Manufacturers Association.

Tomas Tores: Puerto Rico’s GDP has fluctuated between a hundred three to a hundred five billion. How does fit within the United States? It's the number thirty-seven GDP in the nation. If you consider what is in the manufacturing sector, which is half, actually some of forty-eight billion.

Puerto Rico's GDP manufacturing sector is number eighteen. The vision of how to control the system needs build around that. How to get there?

There are hospitals or big commission centers. Those centers could produce their own energy. They can be renewable. They can have CHP. They can be the fifty-first state, as Julia [Hamm] is going to mention, I’m sure.

We need to be resilient. Where I live we don't have any power. Right now, about eighty percent is out, in week five of the hurricane. I need to stress this.

The mayor of San Juan says people are dying; the statement is true. I have my personal loss in my family, very close to me. It's true.