Electricity's hundred and thirty-five years have been filled with conflict. The battle over the Energy Secretary's proposed resiliency rulemaking is the latest of very many. 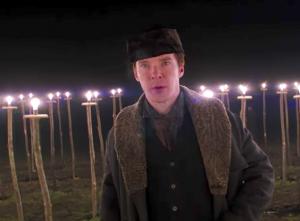 Electricity was a top issue deciding the presidential election of 1932. Electricity drove the passage of landmark environmental law in the seventies, and landmark financial law in the two-thousands.

For reasons we might discuss and debate, electricity has always been politicized. Always, back to Pearl Street Station. Even earlier. But that's for another column.

One reason stands out. Electricity is the lifeblood of our society. It is essential, and was recognized as such even in the late nineteenth century.

Our industry is consequently huge. In each of our conflicts, the stakes are large. Little wonder then that the fighting is fierce.

Our first war? Why, the War of Currents. And two star-studded major motion pictures are coming out on our first war, as discussed in this excerpt from October's PUF 2.0:

There are not one but two flicks on the Edison-Westinghouse-Tesla current war coming to a big screen near you.

The furthest along is The Current War, starring Benedict Cumberbatch as Thomas Edison, Michael Shannon as George Westinghouse, Nicholas Hoult as Nicola Tesla, Matthew Macfadyen as J.P. Morgan, and Tom Holland as Samuel Insull. The conflict between Edison's direct current system and Westinghouse's alternating current system is dramatized by Cumberbatch, Hoult and Holland, all three stars of superhero movies.

Release was November 24, but since the infamous Harvey Weinstein was involved in production, you won't see it until next year. Notably, the film's writer was Michael Mitnick, no relation to Public Utilities Fortnightly's Editor-in-Chief.

Coincidentally, a second flick on the current war is in production, this one based on the extraordinary book by Graham Moore, The Last Days of Night. Moore is the acclaimed writer of The Imitation Game. The Last Days film will have Eddie Redmayne as the main character, playing Paul Cravath, the young lawyer retained by Westinghouse. Redmayne was the star in Fantastic Beasts.