Early in my career as an energy economist and modeler, a subject I sometimes worked on was load forecasting. It wasn’t the most dynamic field in those days, in the nineteen eighties. And it certainly hasn’t been in the decades since. Until now. 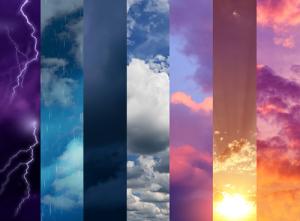 I recall my strong bias back then against a common technique among load forecasters, to weather-adjust. Rather than considering the weather variations that have taken place, the conventional wisdom was that such variations should be statistically removed from the data from which we forecast future demand for electricity.

Later, in the nineteen nineties, it occurred to me as it must have to other energy economists that if climate change raised temperatures, then electricity demand would rise too. If only because of increasing demand for air conditioning. Which would worsen climate change, in a vicious cycle. Since that increased demand would be met with greater fossil fuel-fired generation and greater emissions of climate change gases.

Now it’s apparent that rising temperatures is just one of the furies of nature brought on by climate change that can mess with our electricity systems. Extreme heat drives up demand for space cooling. Combined with extreme drought, the incidence and extent of wildfires increases. Plus, when water is short, that gums up our generation system. Extreme storms wreak havoc across our distribution system.

As we transition to wind and solar generation, better understanding of so-called microclimates is imperative. We really do need to know exactly when and exactly where the wind will blow, and the sun will shine, with much more precision.

Same thing with wildfires. Utilities in the west are developing the most advanced weather prediction processes in history. So they can know down to the pole-by-pole level where a tree might fall upon the suspended lines.

What we’re evidently witnessing before our eyes is the convergence of energy and climate science.