Tim Echols (techols@psc.ga.gov) was elected to the Georgia Public Service Commission in November 2010, for a term that ends in 2016. He just returned from Germany where he participated in a study trip at the expense of the German government.

On a recent trip to Germany to study the country’s energy policy, the phrase “energy transition,” or “energiewende” as the Germans say, was on everyone’s mind. After all, this is an election year for Germany, and the country’s national energy policy has flipped traditional energy regulation on its head – bringing with it many new challenges. Germany’s leaders believe they will change the world because of it. Only time will tell. 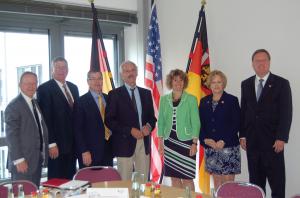 To understand the domino effect at work, let’s begin with nuclear. In the United States, nuclear power is trying to make a comeback. We’re building four new reactors in the Southeast, and public opinion is somewhat positive. President Obama’s support of federal loan guarantees and production tax credits were critical in moving the Southern Company Vogtle project forward, for example. But in Germany – the home of high-tech engineering, BMW, and BASF – supporting nuclear is politically toxic. The country now is in renewable energy frenzy as it shuts down nuclear. What do these different roads mean and where will they lead?

Nuclear power has been unpopular in Germany since the Russian accident at Chernobyl on April 26, 1986. Political deals were made in 1991 to bring an end to nuclear power by 2022. However, in 2009, emboldened after re-election, Chancellor Angela Merkel’s government gave the nuke plants a reprieve: 10 more years of life in exchange for a nuclear surcharge. The continued use of those 17 reactors would supply needed baseload and backup power for a growing renewable grid. Problem solved, right?

In 2011, the tsunami hit the Japanese Fukushima nuclear plant and the German people went mad. It was the proverbial straw that broke the camel’s back. Protests erupted in the street, calling for an end to the use of nuclear power. The pressure was so great that Merkel’s government reversed its position and decided to close eight plants immediately and the remaining units by 2022. Switzerland soon followed. Even France, the gold standard in nuclear power in Western Europe, began to signal it might decrease its nuclear portfolio as well.

Now, the troubling part if you work for a utility. First, the four publically traded companies who owned the German nuclear plants were saddled with huge stranded assets – being forced by the government to close their plants before their useful lives were up. The aforementioned nuclear tax was left in place – just to twist the dagger I think. These companies’ stock prices dropped substantially, and their bond ratings were lowered. Eon, just one of the companies, calculated its losses alone at €8 billion.

I visited with government ministers and over a dozen national Bundestag members, their equivalent of Congress, and none seemed concerned about this ill-treatment to these corporate citizens. The political leaders of all parties brought these utilities to their knees and no one seemed to care – an amazing turn of events.

Germany had enacted the Electricity Feed Act in 1991, which jumpstarted the renewables industry, mostly wind power in the north. The feed-in tariff paid to generators initially was hefty, about €0.47 per kWh (61 cents/kwh using the current conversion rate), but so were the costs of renewable generation back then. The program yielded some results, but not as much as Germany’s leaders had hoped.

In 2000, Germany shifted its energy program into another gear by passing the Renewable Energy Act (EEG). This law proved to be the right formula to motivate the German people to go into renewable energy frenzy. The government authorized 20-year contracts with any and all who wanted to deploy renewables, and guaranteed any energy they produced would be purchased at a premium price – regardless of whether it was actually needed at that moment. Banks then financed these projects, giving homeowners and farmers essentially a second mortgage on an energy system that brought in a check every month over and above the mortgage payment. It was a “gold rush” as one German official explained it to me. Other European countries tried the tariff, or a quota, but no one has had the success the Germans have enjoyed.

The monthly payment that customers receive from their power companies for electricity is recovered through so-called “remuneration” on the power bill. Every customer pays it, except very large industrial companies. This program has been so well received that now about 25 percent of power is generated with wind and solar – with half on private property, what we would call “distributed generation.” Only power companies weren’t getting the money to generate it, the people were. This shift is similar to moving from trains to cars in our country. Large railroad monopolies were suddenly on the outside and out of business.

Here’s the bad news: the program has become so popular that Germany often has excess energy – but at unpredictable times. The surcharge on consumers’ bills continues to grow as more people sign up. In fact, the surcharge is more than the actual cost of the power.

To make matters worse, all of these renewables, which the Germans admit are intermittent and dependent on the weather, are wreaking havoc on the country’s grid, and the grids of Germany’s neighbors. When these surpluses occur, Germany often pays its neighbor Poland to take the excess power. That almost free power affects the energy market in adjoining countries, an altogether separate concern. And when the wind doesn’t blow, Germany’s utilities must buy power back from neighboring countries, or fire up coal and gas peaking units. Some nights Germany’s system operators have instructed the nuclear plants to disengage their turbines from the reactors to keep from producing excess power. In other words, Germany is at the mercy of the wind and sun, making planning difficult. And the utilities are obligated to pay customers for the power – regardless of the need. At the same time, they’re building coal-fired plants in order to fill in the gap – something that my German hosts didn’t want to talk about.

What stunned me is the surcharge German consumers are willing to pay for this green energy – a bill line-item that costs more than the energy itself. In total, ratepayers pay €20 billion for €2 billion worth of green energy. And most seem to have a smile on their face. They’re proud of the course they’re taking, and they want to continue to grow green energy. More than one official bragged that “Germans spend less than 5 percent of their disposable income on energy.” As I was sweating in their conference rooms, I would nod and think to myself it was because no building seemed to have the air conditioner running.

Eventually, almost every conversation would yield this statement: “If we could store this power, the problem would be solved.” I told them about our largest utility, Georgia Power, and their super-off peak time-of-use electric car charging rate we authorized in Georgia to encourage consumers to buy electric cars. I asked if it would make sense to incentivize citizens to buy electric cars with state and federal tax credits and favorable energy prices. No one had given it much thought, it seemed.

Why not, though? Plug-in electric vehicles can help Germany accomplish two major goals: reducing greenhouse gases, and storing electricity. BMW, Porsche, Audi, Volkswagen, and Mercedes are all on their way to producing electric cars. The challenge will be for German politicians to incentivize plug-in vehicles for people who love to shift gears and drive fast on the autobahn.

Nevertheless, Germans insist they will invent large-scale electricity storage, and I believe them because necessity is the mother of invention, and Germans know about high-tech engineering. Already, 25 percent of the country’s energy comes from wind and solar, and German leaders want to be at 50 percent by 2030 and 80 percent by 2050. These numbers are almost inconceivable, but these people are determined.

To the leaders I visited, it appears that America is lagging behind, but I don’t think so. We have some of the cheapest energy in the world, and as one German Economic minister confided, “The United States is about to experience massive re-industrialization.” For us, that is what we need to get back on our feet and get the economy running again. Cheap energy is our secret ingredient. May God bless both our countries as we travel our own roads.