With coal's troubles piling up, so too are stories about the industry's "bleak" future in the United States - a casualty of cheap natural gas, thinning coal seams, and the pursuit of lower-carbon alternatives. Just as conspicuous: utilities, which have long allied themselves with the coal developers, are retiring their older coal units in droves. 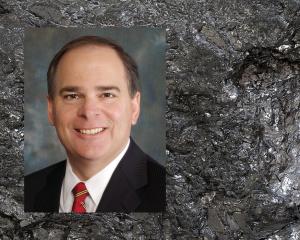 The transformation is stunning. Five-plus years ago, the nation's biggest utilities were bucking coal regulations at every opportunity. American Electric Power and Southern Co., specifically, took aim at regulators and admonished them to work more closely with those entities that rely on coal - to make gradual and rational changes.

Today, though, most of those same entities have acquiesced; a series of adverse legal rulings in combination with consumer demands and newfound energy circumstances have served as catalysts for such changes. What makes this metamorphosis so remarkable is that the coal industry is now alone politically, left with a handful of U.S. lawmakers as their friends and supporters.

"We've used coal-fired generation for decades and decades and have had the Ohio River to move the coal," says Nick Akins, chief executive of AEP and the newly elected chair of the Edison Electric Institute, at EEI's annual meeting, just concluded last month.

"But 25 percent of our coal fleet is now retired," he adds. "We will replace that with natural gas, energy efficiency, and transmission optimization."

AEP has just said that it is officially retiring 5,588 coal-fired megawatts. Within 10 years, coal will comprise 48 percent of its generation portfolio, down from a recent high of 61 percent. Southern Co., meanwhile, is closing at least 2,000 megawatts of coal and oil plants. About six years ago, 70 percent of its generation mix was comprised of coal. Now that number is about 47 percent, and falling. Meantime, Duke Energy has been shuttering 6,800 megawatts of coal.

For at least a half-century, the major coal-burning coal utilities marched in lockstep with the industry that worked to feed their generators. Together, as willing partners, they had perched coal on the throne of electric generation. And because it had supplied more than 50 percent of all power production for decades, it carried political clout too.

But things changed in 2009 with the convergence of a new presidential administration, growing concerns over global warming, and the emergence of new technologies that helped boost the renewable energy sector. The end result? Coal's share of the market for electric generation has fallen by more than half, to about 38 percent today. And natural gas, of course, is filling the gap.

Make no mistake. Power companies have not wanted to forego their productive assets and be forced to build new electric generators, or to buy power on the open market. But many have now recognized that expending the political capital to fight for plants built in the 1950s is not worth it - especially when they can construct combined-cycle natural gas facilities with relative regulatory ease, while also releasing roughly half of the emissions.

"Just as there's been no hesitation to call upon coal to assist in the utility industry's political, operational and technical agendas, coal is relying on assistance from its utility partners to combat the anti-coal forces ....," says West Virginia coal executive Chris Hamilton, in his blog at the West Virginia Coal Forum.

"After all," he continues: "We are 'partners of sorts' and the general coal economy is now asking for greater staying power from its energy partner."

Hamilton goes on to caution utilities that natural gas will not always remain cheap and abundant.

Critics of coal have a different take. They say that the industry has, historically, gotten a regulatory pass. And now that it must comply with stricter air and water regulations, the cost of its product is rising relative to what it cost to generate power from competing sources. The Environmental Protection Agency is, of course, well known for its agenda to fight climate change, but the EPA has also cited the health care costs tied to coal-related respiratory illnesses.

And coal's adversaries are winning: Macquarie Research issued a statement earlier this year saying that the outlook for U.S. coal producers is "increasingly bleak," while also adding that the industry may see more bankruptcies. Already, Patriot Coal has twice bellied up.

The reality, according to a Clean Energy Action study, is that while the United States may have 200 years' worth of coal, those reserves cannot be profitably mined. That's because less than 20 percent of those resources are "economically accessible," with the rest being hard to dig out. Given these strains, it would appear that fewer energy enterprises will be extracting less coal - and at higher prices. Coal production, in fact, has fallen since its 2008 peak by 80 percent in Pennsylvania, 50 percent in Ohio, and nearly 32 percent in West Virginia.

The good news is that the same states are now experiencing natural gas booms. Because of the advent of hydraulic fracturing, or fracking, developers are able to access the shale gas - unconventional natural gas - a mile or more beneath the earth's surface. While the friction between producers and ecologists remains heated, there is now a plethora of such dry gas, making U.S. natural gas prices half of what they are in Europe and a third of what prevails in Asia.

According to a study just released by the Boston Consulting Group in partnership with Harvard Business School, shale gas and shale oil added more than $430 billion to the 2014 gross domestic product in 2014 while supporting more than 2.7 million American jobs - at pay two-times the median U.S. salary.

"Unconventional gas-and-oil resources are perhaps the single largest opportunity to improve the trajectory of the U.S. economy, at a time when the prospects for the average American are weaker than we have experienced in generations," the June 2015 analysis says.

"America's new energy abundance can not only help restore U.S. competitiveness but can also create geopolitical advantages for America," the report continues. "These benefits can be achieved while substantially mitigating local environmental impact and speeding up the transition to a cleaner energy future that is both practical and affordable."

Take West Virginia: coal production has fallen by 32 percent since its peak in 2008. But natural gas has stepped up there, with the permitting of 2,300 wells, of which about 700 are currently active. Each of those active wells comes with a $5 million investment that flows into local economies.

The fuel could supply as much as half of all U.S. electric generation in two decades, up from about 30 percent today. Production, meanwhile, is expected to increase by 60 percent by 2035, says the U.S. Energy Information Administration.

No doubt, the coal universe can take credit for raising living standards during the last century. But the aging plants that did the work can no longer do the heavy lifting. Simply put, there are cheaper and cleaner alternatives, which the public is now demanding. For utilities, it's not personal. It's just business. They are moving on, leaving the U.S. coal industry with a dimmer future.