Electric infrastructure is used half the time on average. Is this a problem requiring rapid radical reform?

Some of you take the subway to work. It's morning rush hour. You squeeze into the train. There's not much room to spare on your car or any of the others. The next train heading downtown is just three minutes behind. It'll be full too. 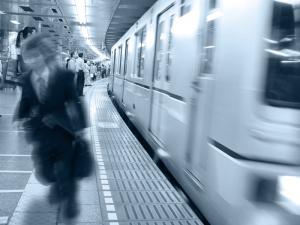 The trains pulls away from the station. Being an energy nerd (you are reading this magazine), a question pops into your head. What's the capacity factor of the subway system?

Fortunately, the surrounding sardines (passengers), packed inches from you, can't tell you're asking such an arcane question. The guy breathing down your neck does give you an odd look. Then you realize those were his toes you stepped on.

What percentage of the time is all the capacity of the subway system utilized? Steel and automobile factories have rates of capacity utilization in the seventy to eighty percent range. In your field, the maximum capacity of nuclear power plants is utilized around ninety percent of the time. The so-called capacity factor of fossil fuel power plants varies widely.

Does that mean they're dumb capacity with their pathetic little capacity factors? Not if their very occasional usage keeps the electricity flowing to hospitals, facilities for the elderly, child care centers, fire stations, water treatment plants, even subway systems.

Peakers are like the subway cars, maybe the one you're on now, that sit around for twenty hours a day, twenty-four hours a day on weekends and holidays, and are dispatched during weekday rush hours only. You crank that through in your head, a common capability of energy nerds. That's a capacity factor of twelve percent.

Is a fifty percent capacity factor, for the subway or the electric grid, bad or good? It turns out, you need more information to answer that question.

In that regard, a heavily-used government facility might have a high capacity factor, but also a high cost relative to the benefit it provides to citizens. The opposite can also take place. A lightly-used facility might have a low capacity factor, but also a moderate cost relative to the substantial benefit it provides.

Think of a volunteer fire department in a small town. It provides enormous value to the sparse community though its capacity factor is miniscule.

Consider the local pro or college football stadium. People absolutely love to go to the games. Rooting for the team, wearing the team colors, binds the community together. Yet the stadium is only used a few days a year. Its capacity factor is closer to five percent than to ten percent.

Does this mean football stadiums or other sports arenas, with capacity factors far less than our electric grid, are inefficient? Perhaps government should reform sports, encouraging distributed forms of entertainment and recreation to drive down the overcapacity in sports and spur consolidation of teams and stadiums.

It's easy to name a few. Office buildings, the armed forces, our roads, the Internet, your favorite ice cream place, your beach house, the ski slopes, the supermarket; it matters not that they have low capacity factors. They all provide high customer value.

Similarly, our electric grid provides enormous value to its customers, which is all of us, with a combination of infrastructure and workforces with varying capacity factors. Like on a championship baseball team, there are the workhorses, the pitchers who give you a lot of innings. The grid's workhorses are its baseload nuclear and fossil power plants. They also give us a lot of innings and so have higher than average capacity factors.

Then there are the bullpen specialists, the relievers that come in to get out the power hitter when the game's on the line. The grid's specialists are its peak fossil power plants. They also save our bacon in tight spots though they have lower than average capacity factors.

A fair question to ask would be, are the peak fossil power plants the most efficient way to wiggle out of those tight spots? Or whether a demand-side resource, that you can count on as firmly as the peak plants, is significantly more efficient.

One way or the other, utilities, regulators and political leaders have a solemn responsibility to be absolutely sure that we do wiggle out of those tight spots. In baseball, if the bullpen lets us down, we lose a game and look to tomorrow's contest. In electricity, if the peak resources (supply and demand-side, central station and distributed) let us down, people in our communities suffer, some severely.

I've heard policymakers talk as if they didn't fully appreciate the seriousness of the risks of failing our communities on occasion. As if a blackout from time to time might be a necessary by-product of reforms to accelerate the battles against climate change.

Reminds me of how Enron executives used to be flippant about the risks to reliability. In their case, accelerating the battles against regulation was the priority. Reliability was secondary and taken for granted.

Also reminds me of Enron's infamous asset-light philosophy. Operators of virtual assets and their financial derivatives were smart. Owners of grid infrastructure were not. Capacity would be commoditized. Any excessive capacity would be rendered uneconomic and mothballed. How did that turn out?

How do you feel about this capacity factor problem or non-problem? Think baseload is bygone or peakers passé? Tell us in a Letter to the Editor, mitnick@fortnightly.com. We'll publish the best of the letters that come in.