Getting to “yes” with cities and neighborhoods.

Suzanne Pletcher is Director of Communications for the Southwest Energy Efficiency Project (SWEEP), where she works to share SWEEP’s marketplace analyses and support proactive public policy in the region. She is an award-winning public relations and investor relations professional and former journalist who founded the Boulder County Business Report in Colorado. Adam Bickford is a Senior Associate in the SWEEP utility program, where he specializes in demand-side management program review, participation in utility rate cases and legislative analysis. Dr. Bickford has worked as an evaluator and policy analyst for more than 20 years, most recently for the Missouri Department of Natural Resources Division of Energy where he participated in rule making that established the structure of the Missouri Energy Efficiency Investment Act.

When Xcel Energy Colorado first asked the state's Public Utilities Commission (PUC) in May of 2015 to approve an energy savings plan to replace 96,000 High-Pressure Sodium (HPS) streetlights owned by Xcel Energy with Light-Emitting Diode (LED) lamps, the utility envisioned a straightforward plan: Replace the lights street by street, city by city, in a logical progression over five years. 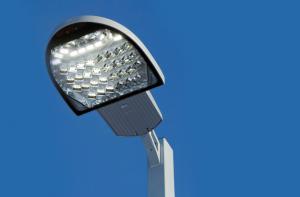 But that's not what happened. As it turned out, everything about the plan except for the five-year time frame got tweaked before the PUC approved the final version in October 2015. Yet during the six months of mediated discussions over the terms of the plan, Xcel Energy was able to forge stronger customer relationships and develop a streetlight conversion plan that everyone approved.

"We recognized that there were cities that had concerns. Even though streetlights are 1 percent of our business, these cities are all huge stakeholders who are involved in the other 99 percent, so we tried to make this work in a way that was as collaborative as possible."

The story that follows will show how Xcel Energy and its municipal customers attained their agreement. And it will offer lessons for other public utilities and communities that are planning LED streetlight conversions.

A Mandate to Save Energy

Xcel Energy Colorado operates under a state-imposed Energy Efficiency Resource Standard that sets annual goals for energy savings and provides a bonus for meeting those targets. In 2013, the Colorado PUC set the energy savings goal for Xcel Energy Colorado at 400 GWh per year. To help achieve that goal, Xcel proposed a conversion of HPS streetlights to LEDs over a five-year period, from 2015 to 2020 - a plan that would contribute annual savings of about 12 GWh towards Xcel Energy's 2016 savings goal. And project savings would increase over the five-year period, as more streetlights were converted to LEDs. The PUC approved the idea of converting street lights to LEDs to help achieve the savings goals, even though Xcel Energy owned the lights.

In fact, Xcel had shown already that switching utility-owned streetlights to energy-efficient LEDs could save an enormous amount of electricity.

Before Xcel Energy rolled out the streetlight retrofit to all of its Colorado customers, it had run small pilot projects with the cities of West St. Paul, Minn.; Amarillo, Texas; and Denver, Colo. In 2013, as part of the Denver project, Xcel had converted 65 HPS streetlight fixtures to LEDs in that city's Highlands neighborhood. Over the project's two-year term, Xcel discovered some of what a streetlight conversion could do:

With the pilot project having shown clear benefits, the next step would have Xcel file a tariff plan to set the monthly billing rates that cities would pay for the conversions and for operation of the new lights. And to that end the Southwest Energy Efficiency Project would provide a helping hand. SWEEP filed comments in the tariff case and acted as a mediator to get the project off the ground. Operating under PUC rules for negotiations, it met with municipalities six times during the three month response period to make sure that everyone understood the details of Xcel Energy's conversion plan and tariff bill and - if they had concerns - filed comments with the PUC.

And as events transpired, it soon became evident that many municipalities would indeed have concerns.

But as SWEEP began to meet with the municipalities, at least five key concerns emerged - concerns that would lead to subsequent requests for flexibility in the new streetlight conversion tariff:

"Quite honestly, the showstopper if we had one was the 4,000 Kelvin rating of the LEDs, and we heard from other cities that it is too bright for neighborhoods," added Terri Goodwin, utilities administrator for the City and County of Denver. "Seattle heard a lot of complaints. We don't want that. But that's the standard that's out there."

Working Out the Details

Once the cities had filed all their responses to the proposed tariff, Xcel realized there was a trust issue and that some cities harbored deal-breaker concerns. All told, at least a dozen key customers, including Denver-metro area cities that intervened in the case, had filed comments. They questioned various details, such as the timetable for installation, the nature of the LED products, and the cost to their taxpayers.

The communities asked Xcel Energy a number of questions:

As project mediator, SWEEP participated in five additional meetings with all of the parties to get Xcel Energy and the cities to a settlement. And SWEEP was very up-front about its role: to get all of the parties to an agreement so that the lamps would be installed, Xcel Energy would gain its energy savings, and the cities would advance their sustainability goals and provide superior outdoor lighting. SWEEP's own goal was to get the most efficient equipment possible into the electricity system in Colorado.

Denver utilities administrator Terri Goodwin added that having an entity like SWEEP to convene all of the cities helped her "feel like I wasn't on an island on my own - that other cities had the same concerns as us."

A Matter of Trust

Back at Xcel, project manager Robert Osborn saw the negotiations as a lesson in how to earn trust.

"It took a lot of courage on the part of cities engaged in this process to really want to sit down and learn and work with us to find a negotiated decision," he said.

"There was a trust issue," Osborn realized as well, "and some of it is related to understanding our business model and how we bill."

The trust issue had been building ever since the late 1980's. Back then in Colorado, Xcel Energy had an "all-in" flat rate for streetlights. All-in means that every city had the same streetlight billing rate and all maintenance was included. But during the recession in the late 80's, new cities with new infrastructure began complaining that they were subsidizing cities with older infrastructure and higher maintenance costs.

In response, Xcel had developed a two-tiered rate for streetlights. The monthly bill covered the energy service and routine maintenance such as bulb and photo-cell replacement. Customers got another bill for secondary maintenance including fixing knocked-down poles, wire and conduit failures and corrosion of poles. Often, the customers didn't know what the secondary bills were for. Streetlights represented one percent of the utility's business, but Osborn's community relations team now found themselves spending 30 percent of their time explaining the cost of streetlight maintenance.

"That's where we started losing connection with some of our customers and the trust issue began," said Osborn.

When Xcel Energy submitted its LED streetlight conversion tariff, some cities didn't trust the pricing. Several cities had erected their own LED streetlights and knew that LEDs dramatically reduced energy and maintenance costs. They wondered why they weren't seeing big reductions in their monthly bills.

In response, Osborn decided during the negotiations to put everything on the table. With SWEEP providing balance, the utility walked the cities through its tariff pricing. Xcel explained the details of LED technology and its business model. Osborn used a simple pie-chart analogy to help cities understand why their billing rates would only be five percent lower under the new tariff plan.

A city's monthly streetlighting bill divides a pie roughly into thirds. One-third covers administration, taxes, billing, and utility crew time for streetlighting services. Another third covers "facilities," streetlights, wiring and routine maintenance. The final third covers energy. If you cut energy use in half using LEDs, you're only cutting one third of the whole bill in half, he explained.

Meanwhile, he explained, the cost slice for facilities gets bigger with LEDs. A high-pressure sodium bulb might cost $10 and last five years, Osborn said, while an LED conversion comes with an entire "head," which costs around $350 or more but lasts 15 to 20 years. There's no routine maintenance needed for LED streetlights, but at the end of the day the bottom line cost savings from conversions aren't much. That's especially true when the monthly utility bill includes the amortized cost of the new LED heads repaid over 30 years.

During the mediated settlement process, Xcel Energy developed two options, Option A and Option B, that eventually won approval from the cities involved in the project. Xcel's Robert Osborn explained the rationale:

"We offered options in a spirit of cooperation," Osborn said.

"If we are installing a light with a 15-year life at a cost to the customer, those customers want to feel good about the next 15 years."

Option A. For cities with redevelopment projects, the mandated conversion rate was lowered from 100 percent of all streetlights to 90 percent, with sequencing built in. Option A included the cost of the LED heads and conversion and was billed as a monthly all-in rate. It provided an average 5-10 percent savings over the old billing rate.

At the same time, however, Xcel advised the cities that, particularly with Option B, it was losing efficiency and the billing rates would reflect that:

"If we know that we are doing a whole city," Osborn explained, "then we can purchase LED heads at bulk pricing, run our trucks up and down the streets over the course of a few weeks, and get it done. When we do 10 blocks over here one week and another 10 blocks over there three months later, we lose those efficiencies."

Xcel Energy and the cities also agreed to revisit LED technology and pricing every three years and file to adjust billing accordingly.

Denver utilities administrator Goodwin saw the choice as a tradeoff:

"Our thought process if we went with Option B," she said, "was that we might make residential neighborhoods the last in line to be converted just to be sure that we got the best light possible. Xcel might have another offering in three to five years that wouldn't be quite so bright."

With a settlement agreement submitted to the PUC and approved, all that was left was for Colorado communities to choose which Option they wanted. Then Xcel crews could get to work.

Denver's Goodwin was pleased with the process:

"We always want to be a partner with people whenever we can," she noted. "It always works out better if you can find a win-win."

Goodwin added that her city has grand plans for the future, in which Xcel Energy will surely be involved, so that preserving the relationship was important.

"We tried something new and we achieved our goal and we did it in a way that I feel very proud of," he said.

"We were able to have a dialogue at a higher level to explain our company processes and also to hear what the concerns were."

SWEEP also was pleased with the outcome of negotiations, citing the overarching cost-savings and public health benefits of consuming less electricity.