Ryan Popple is the president and CEO of Proterra, the leading innovator of zero-emission, battery-electric buses. Previously, he was a partner at Kleiner Perkins Caufield & Byers. An early employee of Tesla Motors, he was senior director of finance at that company, with a focus on strategic planning, technology cost reduction and corporate finance.

PUF's Steve Mitnick: Ryan, tell us about your company's EVs. 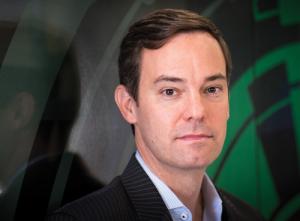 Ryan Popple: When people hear about an electric bus, they assume that it's quite simple. They think that you remove the engine and the fuel tanks from a traditional bus and you put some batteries in and an electric motor and you've got an electric bus.

It's actually quite a daunting technical challenge to build an electric vehicle that can serve as a U.S. mass transit bus. These buses are some of the hardest working vehicles in the world.

They drive anywhere from four to ten times as many miles per year as cars. They're out there three hundred sixty-five days a year in the toughest conditions, loaded with passengers; sometimes passengers with luggage. It's a really demanding business.

Proterra's been more successful in the North American bus market than any previous company that tried to introduce electric vehicles, because we really took a holistic approach to designing the vehicle from the ground up to be an electric vehicle. 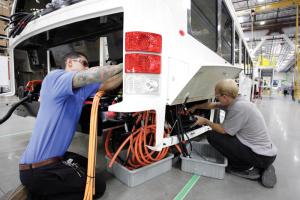 We didn't just take the engine out and put batteries in, because that's what many other companies have tried. They've failed to develop a long range, high performance, cost-competitive electric vehicle.

We purpose-built the chassis of the vehicle to be an electric vehicle. We took over four thousand pounds of weight out of the conventional bus design by using a lot of carbon fiber, a lot of fiberglass, and some steel in the lower parts of the bus.

We designed special modules, battery packs and enclosure areas underneath the bus so the batteries are distributed perfectly between the axles. The bus has a really low center-of-gravity, and exceptional handling.

We also designed a purpose-built heavy-duty drivetrain because you can't just take electric motors that were designed for cars and stick them in buses. They're not powerful enough. A number of those things came together. 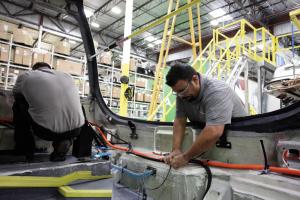 That's enabled us to achieve things like the longest-range production electric vehicle in the world. We also have about sixty U.S. cities that are current or future customers for this technology.

PUF: How did you arrive at this design? What got you in to this?

I'm the CEO and the business leader of the company, but Dale is really the heart and soul behind this thing. He started this company as the first employee, self-financed it, and really got it off the ground during the first five years of development. 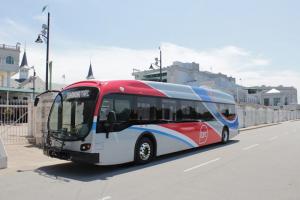 I give Dale all the credit for having the idea to do a purpose-built vehicle. I was working at an investment firm that had a significant investment in Proterra. Because of my experience at Tesla Motors and with other vehicle and alternative energy technologies, my firm got me more and more involved with the company.

Dale and I are partners in this, in that I bring the operational and EV experience, and Dale brings the product vision. Together we're trying to execute on Dale's original dream.

PUF: Buses are big, heavy, and get punishing treatment in all sorts of weather. It seems like a really tough market to crack. 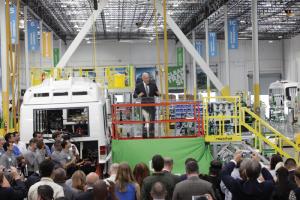 CA Governor Brown at a ceremony at the factory

Ryan Popple: It absolutely is. This is a market where you can't make claims. You have to prove it by deploying with real world transportation agencies. And by supporting the buses through every operating environment and every weather pattern they're going to see. You have to stick with your customers and relentlessly support and improve your technology.

I think New York is a great case study for how important this technology could be to a major metropolitan area. New York City has fifty-five hundred heavy-duty transit buses. That is the largest bus fleet in North America.

But when you look at that existing transit fleet in New York, those fifty-five hundred buses only get about four miles to the gallon with diesel. 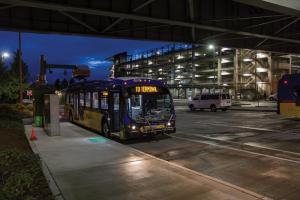 We did a rough calculation. New York City's bus fleet emits the equivalent of an Olympic size swimming pool filled with diesel fuel being burned up within the city limits every week.

What we know about diesel pollution and its impact on human health tells us that we absolutely have to make it a priority to get a lot of these large bus fleets that are diesel-dependent off of diesel and on to electricity.

The good news is that's already starting in New York City. We're in the middle of our first EV deployment program. We can't comment on the details of it because we've got to let NYCT take the lead on that, but I think you're going to hear a lot of exciting things about Proterra EVs and New York City transit within the next couple weeks.

PUF: What are the benefits if the U.S. really switches over to electric from diesel?

Ryan Popple: We can absolutely do a wholesale changeover of fossil fuel powered transit buses and probably school buses as well.

If we had the vision as a country to eliminate that massive amount of fuel consumption and pollution that impacts our cities, technically we could actually start doing it today. We would reduce the greenhouse gas impact of transit by eighty percent.

The reason that I'm so passionate is that we don't have to wait ten years or even five years to really get serious about this. We have customers that already have one-hundred percent EV bus fleets.

We have a customer, the City of Seneca, in upstate South Carolina, that serves the Clemson University area. They haven't purchased a gallon of diesel for their bus fleet in years because they've been running Proterra all-electric buses.

I believe Shanghai has completed the transition of a sixteen-thousand vehicle bus fleet from fossil fuel to electric and they're done. If major cities in China can cut their greenhouse gas emissions and eliminate local pollution, this is really just a question of do we have the energy, the vision, and the leadership to do it in this country?

PUF: Are the electric bus mechanisms simpler and do they break down less frequently?

Ryan Popple: Yes. Since a diesel bus is in a stop-start urban application, that engine is revving up, and cooling down, and stopping, and starting, five hundred times a day. Bus engines, transmissions, and brakes get worn out much faster than trucks.

You've got vested interests in this industry that know when we change over to EV, their whole business model doesn't work anymore. They fit the classic razor - razorblade model. They're basically selling cities a product that comes with a lifetime of spare parts that are going to be required.

To make one final point on that as an example, we've had Proterra buses on the road now for several years, and we've accumulated over four million service miles in a variety of climates. Because our vehicle can slow itself down by regenerating power through the motor, there is much less wear and tear on the brake systems. There's not a single Proterra customer that has had to repair or replace their vehicle braking systems because of that EV technology. We haven't had to do a brake replacement yet.

PUF: What's holding us back? What does it take to really push electric buses into the mainstream, faster?

Ryan Popple: I think the awareness has really broken through in the city transit sector. On the school bus side, which is the next market I think the technology will enter, we're still at a very early phase of awareness.

If we wanted this to go even faster, I think we would need to have a cash for clunkers program for buses, so cities could take buses off the road faster. The only thing that holds us back is that a transit bus typically has a twelve-year asset life. The transit buses that are purchased in 2018 that are diesel, are going to be on the road until 2030.

PUF: It's a matter of education?

Ryan Popple: Yes. The main thing is just education, but the good news is we're shipping buses to multiple cities every month. As people experience them, and the operators experience them, they learn that actually these vehicles are better in every metric than a diesel bus.

They're quieter, faster, can climb more hills, and have more interior space. That makes sense because diesel buses are old technology and haven't fundamentally changed in decades.

Ryan Popple: By 2030 if a single diesel bus or natural gas bus is sold in any major city in the world, I would be disappointed in our industry and its inability to bring positive change in this society.

It already makes economic and environmental sense to implement electric buses, so by 2030 I would predict that, from an economic, environmental, and from a regulatory perspective there will be no new sales at all of city transit buses or school buses that are anything other than zero emission.

Most of them will be battery electric. Maybe a few of them will be hydrogen. But I don't believe there's any good reason why a diesel bus would even exist as a product in North America, Europe, or China in 2030.

What does that mean from a vision perspective? It means that the backbone of our service transportation fleet will run on electricity. The noise level in cities goes down, and the air quality improves. I think you have significant impacts on urbanization, in that living in cities will frankly be nicer, because the noisiest, dirtiest thing in the city will be completely gone.

We're already starting to partner with truck and bus manufacturers in North America and Europe, where they're taking the technology we developed and putting it in to other heavy-duty vehicle platforms.

I also hope you'll see Proterra technology helping to clean up a lot of other heavy-duty fleet vehicles as well. Maybe it's mining vehicles, construction, military, or school buses, but that's the big picture.

Anything that's running a high-horsepower dirty diesel engine in a city, we want to go as fast as we can to replace it with something better.