Central Electric Cooperative's CEO David Swank, at his utility's high-tech booth, talked with PUF's Steve Mitnick in a series of brief videos. Central strives to be "the next generation utility" with its Innovation Pointe campus, a mixed use business park engineered and architecturally-designed as an innovation district, providing the latest technologies to tenants. 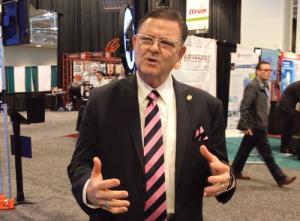