Looking Back and Looking Forward

Arcady Sosinov is the CEO of FreeWire Technologies. 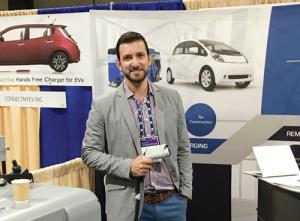 Arcady Sosinov: The energy storage and power boost technology that FreeWire Technologies has developed over the last five years is really to mitigate the cost and grid impact of deploying electric vehicle charging infrastructure. Electrification is happening across the board, from transportation to industrial equipment to aviation. The electric vehicles we see and hear about every day, from companies such as Tesla, GM and Nissan, are a big part of that, but the amount of infrastructure and power available at the grid edge makes it technically complex, expensive, and time-consuming to deploy and subsequently scale up. Especially because the grid wasn't designed to do that in the past.

We started to look at the growth of electric vehicles, and a lot of it began with corporate campuses. In the San Francisco Bay Area, we began working with large campuses such as LinkedIn, Facebook, and Walmart. These companies were installing Level 2 charging stations all over their campuses, but where you have such a high concentration of electric vehicles on one site for a certain amount of prime time each day, they began to experience high electricity costs coupled with high demand charges. That was on top of the ever-increasing construction and infrastructure costs of deploying the stations themselves.

We knew we needed to find a compelling solution to address that. We developed a service called Concierge Charging™. And we started deploying it at campuses to lower infrastructure costs while also manage energy consumption during peak times.

It is a great economic value proposition for the customers, because they can avoid trenching, striping, and signage, and avoid demand charges during the day. Employees were also happy because they could avoid moving their vehicles throughout the day, or deal with the headache of finding an available charging spot in the first place. It's a great model to scale up EV charging for corporate campuses and to avoid all of the up-front infrastructure expense. 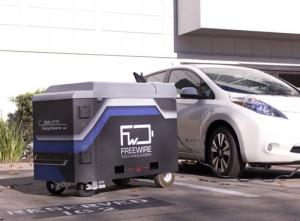 PUF: The cool thing about your device is that it wheels around and plugs into the cars one at a time as they're needed, right where the cars are parked.

Arcady Sosinov: That's right. It's called the Mobi Charger.  We say that "instead of the car coming to the charger, the charger comes to the car."  It's a combination of the technology, which is a mobile battery-integrated EV charger, plus a compelling business model.

We have service attendants on-site. Most of the time it's our service attendants, although we also often partner with preferred service partners or the customers' own service attendants. There's an app that goes behind it, where an EV driver will arrive at work in the morning, open the app, drop a pin on where he or she is parked, and then throughout the day we have a service attendant who charges their car. They get a number of notifications on the app, so they have the comfort of knowing that the car is being charged and will be full when they leave.

The service attendant moves from car to car, and it's easy.  An employee doesn't need to come out to one spot. They don't need to start e-mailing a service list of people to see if they can get the next parking spot. It eases a lot of frustration from that perspective.

PUF: What kind of success have you had so far?

Arcady Sosinov: We initially deployed at our first customer site, which was LinkedIn, about four years ago. Then we started to go from campus to campus. We specifically targeted campuses that offered electric vehicle charging, because they had already felt the pain. Walmart became a customer. Facebook became a customer. And now some of the biggest tech giants out there provide this service to their employees.

It was a good way for us to both scale up our technology, show some traction in the market, and get some big-name customers on our order book. Then we started looking at, how can we service more cities and general EV charging that may not be as predictable as the corporate campuses?

PUF: How big can this get? What's the next big area beyond the corporate campuses of Silicon Valley?

Arcady Sosinov: It's going to be all across corporate campuses. We've identified about five hundred corporate campuses just around the Bay Area that are targets, that can support this business model. Then you look at other cities. But you're always limited in some sense, because corporate campuses are kind of a general availability.

A part of that was because Level 2 charging had predominance at that time. Many cars did not have fast charging availability yet.  Now fast charging is very predominant. It's available in just about every EV you can buy. That's where the business model and the technology really scales up.

We said to ourselves as a company that we're mitigating infrastructure. We're easing the adoption of electric vehicles by mitigating those upfront challenges and expenses that come with installing charging infrastructure, and that works really well for fast charging. It worked fairly well with Level 2 on these large corporate campuses. But with fast charging, supercharging, and ultra-fast charging, you can see exponentially large benefits from our technology.

PUF: So, if it's slower charging, then you have to have the Mobi battery in front of one car for a long time. But if it's fast charging, you can hit a number of them.

Arcady Sosinov: Exactly. Early next year, we're launching a supercharging version of the technology that can be used as both a mobile and stationary system. The biggest innovation is that it plugs into the low voltage grid, using power you may already have available onsite. Then the system buffers all of the energy on the on-board battery system and uses high-efficiency power electronics to "boost" that power to the vehicle. In simpler terms, it's a 120-kilowatt supercharger that uses 10 to 20 kilowatts of grid power. You can charge two cars simultaneously up to 60 kilowatts each, or one car at 120 kilowatts. It's very high power to a car, meaning you'd charge the car in about ten minutes or so.

That's a huge benefit for sites that are looking at the cost, expense, and time of upgrading their infrastructure, and power.  That's especially true for a place like New York City, which is why I'm so attracted to it. You have all of the parking facilities with almost no power available. Upgrading the grid in places like that is going to be pretty much impossible.

That's our whole plan and strategy, to go into urban areas such as New York City, San Francisco, London and Tokyo, with New York City being the ideal target market, and putting fast chargers across the city, in places that otherwise would not have had them.

PUF: If people see that you have an electric car, and it gets filled up or topped off, while it's just parked, and they contrast that with going to the gas station, it's going to impress a lot of people.

Arcady Sosinov: Yes. I think it's already starting to. Charging becomes an everyday part of your life. My thesis is you don't go to a "fill up" type of model for charging. Instead you constantly top off your battery because charging is so convenient.

You go to Starbucks, and you charge up while you're there getting a coffee for ten to fifteen minutes. Again when you go to the doctor's office, and so on. That's exciting for us as a company.

I think that should also be exciting for utilities and grid operators. These utilities have an opportunity to touch their customer more often. Anytime they're just running through their daily life, you're providing power to them at fast rates, and that should be incredible. I think they've responded nicely to our concept of allowing that to happen, but without needing all that upfront copper in the ground and panels. We already have a number of major utilities as customers, and we're happy to work with them.

PUF: How can the utility industry and the regulatory committees help stir this, knowing that it would be a tremendous catalyst for electric vehicles?

Arcady Sosinov: For the utility sector I would say consider battery-integrated fast charging. I highly recommend utilities spend the capital on battery-integrated fast charging rather than on putting copper in the ground and upgrading transformers.  Because there's always a limit to copper in the ground. There's a huge influx of electric vehicles, and existing infrastructure is just not going to be enough.

Battery-integrated fast charging can really give electric vehicles a high penetration rate. They're easier and faster to deploy.  There's always a struggle between utilities and permitting, and the timing it takes.

A battery is going to really simplify that. You can go from six to eight months for the permitting and construction costs, just down to several days. That's compelling. Especially when the end goal for utilities, for us, for EV drivers, is to get more charging infrastructure out there. That's what we all want.

For the regulator, look at public funding opportunities. There are a lot. California has close to a billion dollars of public funds available for them. New York just announced two hundred and fifty million-dollar programs.

We've gone to NYPA [the New York Power Authority] and we've told them that we think you should be spending money on, in our example, battery-integrated fast charging. Because that's the more future-proof technology. A lot of regulators and public funding entities have responded well to that.

PUF: How optimistic can you be about the future, say, three to five years out?

As soon as fleet operators get their heads around the economic benefits, you'll see major fleets like car sharing, delivery vehicles, and small city parcel vans, and they're going to switch up a hundred percent of their fleet.

What that's going to do, is drive companies like us who deploy vehicle charging infrastructures to put more units out there.  That's going to be a virtuous cycle, in which consumers now see that charging technology industry in parking lots, in the corporate campuses, anywhere, and they're going to be more likely to buy.

More utilities and more site hosts will see the cost advantage.  We have data to show that we are less expensive to install than a traditional fast charging station that relies on just the copper pipe. We show some benefits of ongoing costs, because we're smoothing that piece down. We're a constant flat line on the grid rather than a peak.