A Day at the Delaware PSC

The PUF team traveled to Dover, Delaware to visit the Public Service Commission, and the timing was perfect. For the PSC turned 70! Having formed in 1949, the PSC held a reception on September 12, attended by former Commissioners, retirees, elected officials, company executives, and dignitaries to celebrate its platinum anniversary. And there is much to celebrate in this small but mighty state. 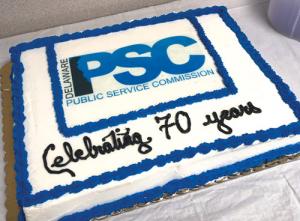 A Day at the Delaware PSC Conversations: