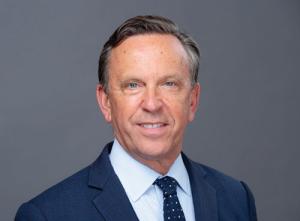 PUF's Steve Mitnick: This event gathered together, not only the New York Power Authority, but some known leaders in the industry. Why were you there and what did you do?

Justin Driscoll: It did have quite a roster of industry leaders. This is typical of NYPA, what we did here. There's been a lot of discussion over the years about the role of green hydrogen and as a long-term potential replacement for gas plants, with some kind of hybrid use of hydrogen.

We're fortunate to have several of these peaker plants that by their nature don't run all the time. It's not like you have to perform an outage in order to run a test like this.

We thought, we've got this peaker plant and everybody's talking about to what extent green hydrogen can be blended with gas in order to fire some of these plants and what the resultant emissions would be. So why don't we get together a group and test it? Let's see what we can find out.

We partnered with GE Power that owns the LM 6000 engine that fires the plant. I didn't realize this, but they're the same size of the engine in a 747 jet. It's the same engine that's used in these power plants.

We were on the research side and Airgas was the supplier of the hydrogen. We constructed a way for hydrogen trucks carrying hydrogen to back up to our power plant. We will pipe in hydrogen, mix it right at the plant, blend it with gas, and then feed it into the plant. We're going to start at five percent green hydrogen and see what happens. Gradually we're going to work our way up to the low thirties and up to thirty-five percent hydrogen.

We're going to see what the effect of emissions is in that process. Then we're going to share that information with the entire industry. This is a first test of its kind in the country.

PUF: There were ten or eleven peakers around the city. Is this at one of these locations?

Justin Driscoll: Yes, it's at our facility in Brentwood, Long Island, that supplements and serves as a resource for the Long Island grid.

PUF: There's been a lot of talk and study. Can you do it? How much hydrogen can you mix in?

Justin Driscoll: We're going to share those results. There'll be a lot of learning coming out of this. It'll look to inform future studies. But the New York Power Authority has a long history of being a first mover. We're an operating utility, but we have a state mission.

Our mission is to execute on the state's Clean Energy goals. This is a major component of meeting the emissions goals that we've set for ourselves. Maybe use of green hydrogen will be part of the solution.

PUF: What happens next? What's the timing?

Justin Driscoll: Our expectation is in December, we'll start this blending and use of green hydrogen with gas, and we'll complete that work by February. Then we'll compile a report and make it available to the industry.

PUF: There's a lot of natural gas used for power generation. There could be a big impact from what you learn, and a lot of other companies are going to want to see how this turns out.

Justin Driscoll: The long-term goal would be a combination of this type of technology, battery storage, and other approaches to meeting our goals. But this ultimately, hopefully, is a first step in a process toward eliminating the need for a natural gas.

PUF: There are a number of other projects in different areas. Give an overview.

Justin Driscoll: In our commercial group, we're looking at whether our customers would be interested in this virtual power plant concept. It's where you have a distributed energy resource management platform that brings in battery storage or solar or demand management and manages those resources, and then uses some of the energy to sell back into the wholesale market.

Of course, we've got a number of solar and storage projects for our governmental customers. That's been a big area of development here.

I think you know of our efforts on the transmission side in building out the transmission grid. In New York, we've got three active transmission projects being built upstate and we were just selected as a bidder on what they call the Tier Four solicitation. Essentially, it's a renewable energy credit for delivering power into New York City from upstate renewables.

We're part of a project, Clean Path NY, that will use a DC cable to bring wind and solar energy from upstate directly into New York City. For the project, we're going to use our Blenheim Gilboa pumped storage facility as a resource to address some of the intermittency of those renewables.

PUF: Why is NYPA doing all these things? How is New York approaching the climate change challenges?

Justin Driscoll: It's all part of one big effort. It's a global problem. It's not a state or regional problem. That's why it was good to see world leaders getting together in Scotland for COP26, including some of our New York State leaders from DEC and NYSERDA.

We're playing our part in New York State. We were probably the first state to set these aggressive, clean energy targets for ourselves. This is all part of that.

We own fossil plants. Those fossil plants will ultimately have to be transitioned to low to zero carbon emission resources and technologies. It's the law. Not only is it the law, but it's the right thing to do. We're at the forefront of promoting the Governor's clean energy goals and policies.

PUF: What do you find most rewarding in this?

Justin Driscoll: It's rewarding to see that our work locally can have national implications and potentially global implications. Here we are sitting at the New York Power Authority in White Plains, New York, and we're doing what the rest of the country is watching. That's rewarding.