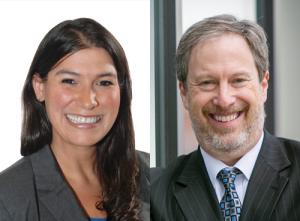 PUF's Steve Mitnick: NYPA and partners had a big event on a breakthrough project test with green hydrogen. What was the point of it?

Neva Espinoza: The event was to launch the first commercial natural-gas-fired power plant in the United States that will demonstrate the technical feasibility of green hydrogen blending, located at the Brentwood Power Station with a view toward reducing carbon emissions.

We're excited about the partnership among NYPA, GE Power, Airgas, Sargent & Lundy, Fresh Meadows, and EPRI. It's hosted by the Low-Carbon Resources Initiative to enable early hydrogen deployment and use case within the power sector. There's a lot to learn about technology and blending hydrogen as part of a decarbonization pathway for the electric sector.

It's a broad industry collaborative to inform us and give the early research data needed as we look at broader application of blending hydrogen within gas turbines. 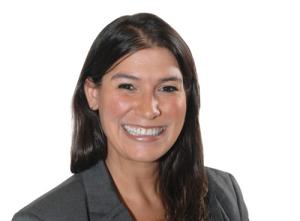 Neva Espinoza: The value chain around a hydrogen economy is going to be important.

PUF: Jeff, GE was there for a good reason. What is it at Brentwood that's important?

Jeff Goldmeer: Yes, it's an LM6000. It's a GE aeroderivative gas turbine. It's the same gas turbine you'd find hanging off a wing on a 747.

The plant was commissioned in 2001. Today it serves primarily as a peaking unit to support Long Island and New York City. With the goals in New York State that NYPA has, and within New York with the CLCPA, the Climate Leadership and Community Protection Act, to figure out how to go to carbon-free electricity by 2040, we have great learnings coming because we're going to do this on an existing commercial asset.

We're taking an existing asset, but the good news is we're not making any changes to the gas turbine or to the packaging system. We're effectively going to do this test on the gas turbine as is, with support, from Fresh Meadows Engineering, Airgas, Sargent & Lundy, and NYPA staff. 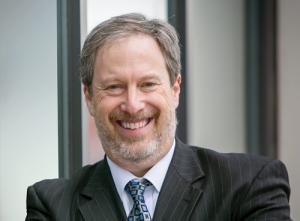 Jeff Goldmeer: The question becomes, can you get the hydrogen? Can you supply the hydrogen at the scales and volumes we need to do this?

We're going to be taking the engine through different hydrogen percentages, up to about thirty-five percent, examining operating characteristics. This is going to be what we'll call green hydrogen, that's sourced, produced by an electrolyzer.

It's not just the hydrogen in the turbine piece, it's the supply chain. It's, what are the infrastructure changes at the power plant to make this happen?

For the Low-Carbon Resources Initiative, all these things need to happen. The upstream infrastructure is critical. We're kicking the tires on that early.

For this ribbon-cutting event, the CEOs and senior leadership were at the power plant. If you look at photos, they were standing and sitting on a concrete pad. That concrete pad is where the hydrogen blending system sits now.

You have a real power plant. How do you integrate hydrogen into that, but not disrupt the operation of the plant, not make major changes to the plant? This takes a lot of planning.

Neva Espinoza: EPRI's role is to dive into better understanding of what it's going to take to blend hydrogen up to a certain percentage in the gas turbine, take those learnings and then drive further development.

EPRI, through our Low-Carbon Resources Initiative, which has forty-eight sponsors and is growing, is going to take all those learnings bring it back to LCRI and continue the research.

For some real-world examples, when we talk about blending hydrogen in gas turbines, there is a lot we need to better understand for this to be a scaled solution. How does it potentially impact the operational profile of the asset?

How does it impact the nitrogen oxide (emission) profile? That is an underlying question we need to answer for existing combustion systems and future developments.

These demonstrations start with the five percent hydrogen by volume blend. Then we up it to a ten percent to a fifteen percent. We have an intentional controlled evolution over a significant amount of time to understand operational and nitrogen oxide impacts.

That is the type of data you would utilize for foundational research to develop things like nitrogen oxide curves based on blending. It's to understand the potential lowest amount kinetically possible.

These types of early-stage demonstrations create the foundation for the research and development within the LCRI and set the basic operation profiles and standards as we move forward.

As part of the preparation work, we've installed new instruments and found new ways to monitor the output of the gas turbine in different parts of the system so we can gain as much knowledge as we can through the demonstration.

PUF: What are you going to be looking at?

Jeff Goldmeer: The concept of putting hydrogen into a gas turbine isn't new. If you look at the steel mill industry, and the oil and gas industry, we've been putting fuels that have hydrogen into gas turbines for thirty plus years.

There's the concept of, can a gas turbine burn hydrogen? We know the answer is yes, but those installations were always about, using waste gases. In the steel industry, this was about using a gas that's coming off a coking unit or off my furnace. It's a gas I might otherwise flare, but it's got a good hydrocarbon content, and it's got a good LHV, so, I'll burn it in my gas turbine and support house load.

The oil and gas industry works with hydrogen on a daily basis. Because of this, industrial hygiene safety measures all exist. We don't have to invent them, we just have to bring them into the power sector.

For example, there's always a question of embrittlement. Hydrogen's a little, tiny molecule. Under pressure, it will diffuse into steels. The rocket industry, the oil and gas industry, have already solved this problem.

If you get the right grade of stainless steel, and typically it's a 316 or 316L, those grades of stainless steel have better metallurgy when it comes to resisting embrittlement. It goes into pipes. We know what polymers work well with hydrogen, and what elastomers do, if you've got certain sealing materials. Those are known solutions.

Now that we're bringing hydrogen in for power and gas turbines that are configured for running natural gas, what happens if you start adding more hydrogen to them? Hydrogen burns hotter than natural gas. Do we get more nitrogen oxide emissions out of the gas turbine?

That's why the work at Brentwood is going to be interesting. Brentwood has a DeNOx system. It has a selective catalytic reduction system, or SCR.

Now we can vary the percent of hydrogen in the fuel and look at what happens to the emissions coming out of the turbine and the stack to understand that relationship. As we put in more hydrogen, how much more nitrogen oxide are we getting? We can validate our models.

The unit at Brentwood is a single annular combustor, and it's a water-injected unit. We also use water injection to help with nitrogen oxide emissions. Now we have two knobs. I love this, because as we go to the concept of a designed experiment, we have these variables.

Neva Espinoza: The timeline for this project's a short order. We're close to being ready to fire this up. We're still doing some construction, making sure we're a hundred percent ready, but anticipate initial results in this fourth quarter to first quarter of next year. We'll take some of those learnings and drive them back into the industry.

PUF: What's the potential? How far can this go?

We have a 6B, a forty-four-megawatt gas turbine, in Asia. That unit's been running for twenty years. The hydrogen concentration in that fuel has varied from seventy percent to as high as ninety-six percent.

But then you have the turbines like this LM6000 at Brentwood. We have our large-combined cycle fleet. Many of those units could run on a blend of hydrogen and natural gas today.

Depending on that unit, that number could be five percent, or thirty percent or more. Some of our HA machines being installed now have the capability of running upward of twenty percent. Our newest machines can go up to fifty percent hydrogen.

The question becomes, can you get the hydrogen? Can you supply the hydrogen at the scales and volumes we need to
do this?

On getting the hydrogen for the Brentwood project for the number of hours we want to run, because the customer wanted green hydrogen, not a lot is being made at scale today at the volumes needed for this kind of test, or even for running on a gas turbine on a continuous basis.

If you want to do this on a continual basis, you've got to locate the supply. That's where the future lies.

PUF: LCRI, you're working on that. How are you going to be producing hydrogen at scale?

Neva Espinoza: The value chain around a hydrogen economy is going to be important as we move forward. This demonstration is going to inform the immense amount of work we need to understand. For example, how do you make this hydrogen in a low-carbon way?

People talk about colors of hydrogen. I stay away from colors because it's all about carbon intensity. How do we make it in a low-carbon way? How do we move and store it over time? How do we utilize it? Low-carbon hydrogen is not as cost competitive today as a fuel.

Our energy system tomorrow is going to value things differently. We're going to need new energy storage and energy carrier mediums, similar to what we have in natural gas today. Hydrogen has potential for that.

The value this brings in decarbonization is important. At about a thirty percent blend of hydrogen, we expect about a ten to eleven percent decrease in overall carbon dioxide emissions from that unit. It's not a one-for-one ratio, though.

That's important to understand as we think about the evolution of our energy system over the next three decades to achieve net zero. Blending will be part of that conversation and transition, along with full hydrogen systems or other derivative synthetic fuels, or even renewable fuel systems.

PUF: Jeff, what are you most excited about in this test?

Jeff Goldmeer: It's the integration. We know the gas turbine can do this, but putting all these pieces together, getting the hydrogen to site, all takes massive coordination. You've got all these parties pulling together because we want to see this be successful.

From a scientific perspective, I'm curious about the nitrogen oxide emissions, as people are concerned about the implications when you burn hydrogen. People have to realize for existing power plants, there's an existing air permit.

The question is, how do you operate a gas turbine, reduce its carbon footprint, and yet stay within the bounds of the air permit that the statewide regulating agencies have put in place? We've got all these boundaries and it's our job as scientists and engineers to solve that problem.

PUF: Neva, what's the most fun for you here?

Neva Espinoza: We use that word collaboration all the time but these teams are working and challenging each other every day to be scientifically rigorous and safe, across organizations.

The biggest technical learning we're going to have is documenting what we see with nitrogen oxide. How is that going to drive our research? We have a lot of follow-on projects identified, that we're working on with major universities, GE, and others, to understand that profile and how that can be impacted by blending hydrogen and natural gas.