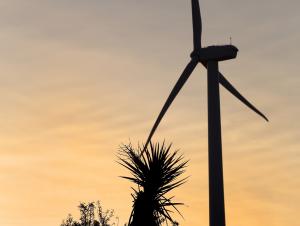 Duke says developing expertise in this advanced technology will help expand the use of renewable energy, better integrate it into the power grid, and make the company more efficient at serving customers. Could batteries and other storage technologies affect the way power producers evaluate and operate their generating assets – in particular fossil fired generating assets they currently rely on to supply ancillary services?

With a year’s worth of commercial operation now in the books at Notrees, Fortnightly’s Power Profit recently spoke with Jeff Gates, managing director in Duke Energy’s commercial transmission business, about the Notrees operating results and the future of battery storage. 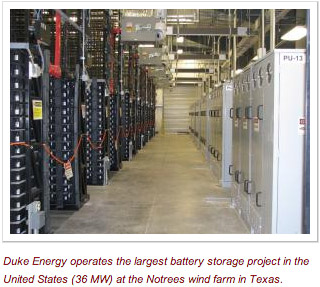 FPP What's the status of the Notrees storage project?

Jeff Gates, Duke Energy: We just completed a year of commercial operation and we’re preparing our first report for DOE. It will include operating data and data on the greenhouse gas reductions ERCOT achieved by using this emission-free resource instead of gas-fired generation. The report should be out in another month or so.

FPP You’re examining the emissions saved by the capacity you supplied ERCOT, versus a gas plant doing the same thing?

Gates: Yes, we’re compiling that information. But there are other benefits too. One of the key strengths of storage delivery is that it’s so much faster and more accurate. If the system frequency level moves to one side of 60 Hz or the other, ERCOT will send a signal to  increase or decrease output. A conventional power plant can take several minutes to ramp to the new output level, so the grid operator has plants that are chasing the signal. By the time they reach their new dispatch level, the grid operator may actually want them doing just the opposite, as the frequency may have crossed 60Hz again in the other direction. With storage we’re not chasing the signal, because the battery can respond with full output to whatever signal they give us within less than a second.

It’s like turning the shower on at home – you want it to be warm, but it’s not, so you turn the temperature up higher, then the really hot water kicks in and you turn it down a bit. You adjust it until you get the perfect temperature. If there’s a two-minute lag every time you try to adjust the temperature, it’s very hard to tune in the perfect temperature quickly. It’s always too hot or too cold. But if it were at whatever temperature it’s going to be within a second, it would be very easy to fine tune it to exactly what you want.

That’s what the battery at Notrees does. It delivers the exact amount of power that’s needed, when it’s needed, which is of tremendous value to the grid operator.

FPP How often have delivered power for frequency regulation?

Gates: In terms of the amount of capacity we were called to supply, I would say roughly six to 10 deployments per hour.

FPP It’s been reported that frequency regulation is the first bridgehead for energy storage. How else might the technology be employed? 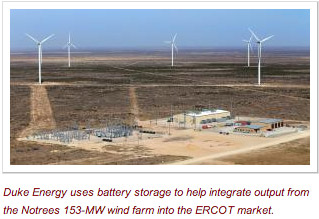 Gates: We’ve done some dispatch into the ERCOT energy market during peak periods when prices are high. But the price differential usually isn’t high enough to do that on a regular basis. During the cold snap in January, 2014, spot prices were in the thousands of dollars, so it certainly made sense to take advantage of that.

Other opportunities exist but they’re market specific.. For example, in California, they have a tremendous need for assets that can ramp quickly and are very flexible, given the increasing penetration of renewables. Most markets haven’t kept up with what storage can provide because they’re designed for conventional generation.

It’s like comparing the smart phone to wall-mounted phones we used 20 years ago. First we went from a phone tethered to the wall to one that was cordless. When the smart phone came along, it could make phone calls, but it could also do all kinds of things nobody ever contemplated- surf[MTF1]  the web, send text or email messages, download music, take photos, play games and provide navigation assistance.

That’s where we’re heading with storage. To use storage only for what conventional generators do doesn’t tap its true value.

FPP And what is its true value?

Gates: Flexibility and reliability are probably the two biggest values. Storage is very flexible in terms of ramp control, and that’s a big issue in California right now. In California, you have a huge amount of PV coming on all at once as the sun comes up in the morning. So you have to ramp down the conventional generation that’s been on-line overnight. And at the end of the day, as the PV generation starts to fall off, you have to transition from PV back to conventional generation. Storage is ideally suited to support that morning-evening transition.

Now, compare that to a gas turbine. A 100-MW combustion turbine has to maintain a minimum output of 50 MW, for example – its minimum set point – to be synchronized to the grid. Depending on how you look at it, you either get two or four times the grid flexibility for the same nameplate megawatts when using storage instead.

Another benefit is siting flexibility. You can place storage close to load centers, or on the right side of a transmission constraint. Not everyone wants to live next to a fossil plant. Plus, you’ve got emissions, siting and permitting issues, including a water supply for cooling. Storage takes many of those issues off the table.

FPP In September Duke announced it will add another 400 MW of wind capacity at its Los Vientos plant in Texas. Any plans for including storage there?

State renewable portfolio standards (RPS) represent an annual GWh target, so X percent of the retail load in a given year needs to come from renewables. But there’s generally no requirement for when those MWh are delivered. It’s for ERCOT or the ISO to determine. And if you sign a PPA for output, the buyer wants the lowest-cost power, and adding storage adds cost. So in a market like ERCOT, it’s difficult to add storage to an integrated renewables project because the cost-recovery mechanism is in two different buckets. However, more and more customers are starting to realize the value storage can provide, and are starting to ask how it can be included.

Hawaii or Puerto Rico – which have very small island grids – require the developer to include storage. You must deliver ramp control and firm output to connect to the grid because a large renewable project on a small grid could cause major stability problems. In markets like that, the rules require storage to be part of a renewable project.

In California, rather than impose the burden on the generator, they’re developing a market mechanism that will incentivize fast ramping resources. They’re basically telling generators if they can provide the flexibility of fast ramping, then the ISO will have a ramping product specifically for that.

In the Carolinas, where Duke operates as a traditional vertical utility, we control the entire value chain from generation through to the end customer. There are no price signals for frequency regulation or flexibility, so the way a vertically integrated utility looks at the issue is different from an IPP in a structured market like ERCOT. There is no question storage can provide value here; it is a question of defining that value, and developing the regulatory framework to allow storage to be included as part of the utility portfolio.

FPP Based on the success at Notrees and FERC orders 755 and 784, could storage technologies someday affect the way power producers evaluate and operate their generating assets – in particular, slower-responding fossil assets in RTOs and ISOs that rely on them to supply ancillary services like frequency regulation?

Gates: That’s the vision we have. And now that more storage is being deployed, more people are asking that question.

If you’re an electric utility in a regulated market, it comes down to how storage is viewed by the utility and the regulatory body. If utilities incorporate storage into their planning today, how do they value that so that regulators will see that it is the best-fit solution and allow them to deploy the capital? Duke has a program underway right now in the Carolinas to study the benefits supplied by a variety of storage technologies.

So the industry is moving in that direction. For example, for roughly the past 50 years Duke has relied primarily on nuclear, hydro, and coal generation. Now natural gas-fired combined-cycle plants are an integral part of the generation mix.

ABOUT THE SOURCE: Jeff Gates is managing director for Duke Energy Commercial Transmission, which develops, owns, and operates electric transmission facilities throughout North America. In addition, Gates has had primary project development responsibility for the Notrees battery storage project.