On April 24, 1877, Charles Brush was issued a patent for the arc light. The competitor to the incandescent light, it battled for primacy well into the early twentieth century. 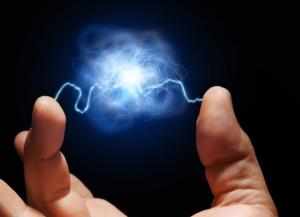 Humphrey Davy had invented the arc light in the first years of the nineteenth century. Never before had man lighted the darkness with electricity.

But the harsh brilliant arc of light, across a four-inch gap, used a lot of power. Batteries, the sole source of power then, quickly ran down.

By mid-century, the race was on to devise an efficient dynamo - an electric generator - to power the arc for longer periods. Brush perfected a design by Zenobe Gramme. Zen for short, he comes up again in this column, below.

Brush illuminated Cleveland's public square on April 29, 1879 with his dynamo and arc lights. Soon, every major city wanted the system for exterior areas.

When Brush turned the system on in Wabash, Indiana, the streets became lit by a "strange weird light, exceeded in power only by the sun... The people, almost with bated breath, stood overwhelmed with awe, as if in the presence of the supernatural." (Courtesy of Bruce Watson, "Light," Bloomsbury Publishing Plc, 2016.)

By then, the Brush arc light system was illuminating Broadway. Hence the name, The Great White Way.

You can run a lamp from sundown to midnight, every day but Sunday. In today's money, the electric bill would be two hundred and twenty five dollars per lamp per week. Pricey.

Zenobe Gramme, Zen, mentioned above for his work on the dynamo, was born on April 4, 1826, in Belgium. His motivation to build a practical dynamo? Cleanliness. He hated the mess of contemporary batteries.

Zen and his partner Hippolyte Fon­taine showed their wares at a Vienna exhibition in 1873. Zen and Hip?

At the exhibition, Hip accidently supplied a Gramme machine with power, instead of drawing power from it. The machine spun in reverse. And the electric motor was born.

Edwin Porter, the leading filmmaker in the first decade of the twentieth century, was born on April 21, 1870, in Connellsville, Pennsylvania. His boss? Thomas Edison.

Porter joined Edison Manufacturing Company in 1899. He managed Edison's production of motion pictures. But he also operated cameras, directed actors, and put together the final print.

His first hits were Terrible Teddy: The Grizzly King (a satire about Vice President-Elect Teddy Roosevelt), Jack and the Beanstalk, and Life of an American Fireman. In these, Porter pioneered new techniques to transition from one scene to the next.

His greatest success was The Great Train Robbery. Though just twelve minutes in length, the film showed simultaneous scenes for the first time. The American public loved it.

On April 14, 1944, Hydro-Quebec was born. As in the U.S., the depression years of the 1930's were a time when political leaders vigorously criticized investor-owned electric utilities and considered their nationalization. In the U.S., the Tennessee Valley Authority grew out of this controversy. The Canadian province of Quebec went further.

The Lapointe Commission had recommended in 1934 a provincial regulator. But Montreal Light, Heat & Power refused to open its books, for years. And, during World War II, it ran an aggressive advertising campaign denouncing government control. This stirred the government to nationalize, compensating shareholders in the post-war period.

Guglielmo Marconi, inventor of radio, was born on April 25, 1870, in Italy. Marconi once sent a letter to the Italian Ministry of Posts and Telegraphs, announcing the invention. The Minister wrote on the letter, "to the Longara." Translation: to the insane asylum on Via della Lungara, Rome.

Radio drove Americans' broad adoption of electric service in the 1920's. Between 1923 and 1930, sixty percent of families purchased radios.