Nikola's Memorable May, and The Donald

On May 1, 1888, Nikola Tesla was issued seven patents that literally made our world. Together with an eighth patent issued two weeks later, Tesla laid the foundation for an alternating current-based electric grid. 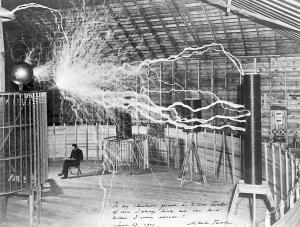 His triumph was celebrated on May 16 in his landmark speech before the American Institute of Electrical Engineers:

"In the presence of the existing diversity of opinion regarding the relative merits of the alternate and continuous current systems, great importance is attached to the question whether alternate currents can be successfully utilized in the operation of motors ...

The transmission of power ... has been almost entirely confined to the use of continuous currents, and notwithstanding that many efforts have been made to utilize alternate currents for this purpose, they have, up to the present, at least as far as known, failed to give the result desired ...

The subject ... is a novel system of electric distribution and transmission of power by means of alternate currents, affording peculiar advantages, particularly in the way of motors, which I am confident will at once establish the superior adaptability of these currents to the transmission of power and will show that many results heretofore unattainable can be reached by their use; results which are very much desired in the practical operation of such systems and which cannot be accomplished by means of continuous currents."

George Westinghouse bought Tesla's patents soon after. And the rest is history. If not for Nikola's memorable May, would there be RTOs, AFUDC, DCF, FERC, etc.?

On January 7, 1943, Tesla died in his room at The New Yorker Hotel in Manhattan. He died at the height of World War II, with the Battle of Guadalcanal still raging.

The FBI became quite concerned. Agents based in New York notified FBI Director J. Edgar Hoover and even Vice President Henry Wallace. Truck loads of Tesla's papers and other property were impounded by the government, then meticulously inspected by John Trump.

John Trump? You mean that John Trump? I do. The MIT professor was The Donald's uncle. The loquacious presidential candidate has mentioned his uncle multiple times on the campaign trail.

The government chose John Trump to judge if any of Tesla's things were critical to national security. But, Trump had a longstanding grudge against Tesla.

Five years earlier, Trump built a van derGraaf generator at MIT. It was, as we might say now, huge. A veritable Trump Tower. Tesla humiliated Trump, however, demonstrating two small coils could deliver the same energy and efficiency. We know Trump's nephew, The Donald, wouldn't have taken kindly to an insult like that.

In his last years, Tesla was working on a death ray, a particle beam weapon called Teleforce. It would have been devastating, it was feared, if plans for a workable death ray fell into enemy hands, and equally valuable if found by our government.

Conspiracy theories about what happened next continue to this day. Some say Tesla's nephew Sava took the plans before the FBI got to The New Yorker Hotel. Some say that while Trump claimed he discovered nothing of importance to national security, the government sequestered Tesla's property and secretly resumed the research.

Why was Trump, an otherwise obscure civilian, sitting right next to General Eisenhower when Paris was liberated? Why did the top secret military departments, who supposedly reverse-engineered alien UFO technology at Rosewell, use Tesla's papers? Seriously, you can't make this stuff up.

There are far too many interesting things to say about Nikola Tesla to fit within this column. He tried to cure his close friend Mark Twain of constipation. Tesla was also close with John Muir, founder of the Sierra Club, who admired the development of hydroelectric power production. In our day, Elon Musk, CEO of Tesla Motors has given a million dollars to rebuild the great inventor's lab on Long Island.

When Tesla died in that hotel room, in 1943, the place was filled with his best friends, New York pigeons. If you go to the corner of West 40th and Sixth Avenue, you'll see a sign for Nikola Tesla Corner, where he loved to feed pigeons while sitting in Bryant Park.