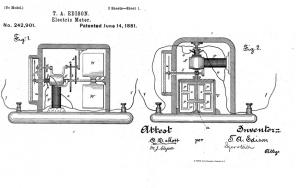 The name might seem vaguely familiar. In an electrical engineering or physics class that you struggled to keep awake in, the prof defined the unit of electric charge.

The coulomb, or just C, is the unit of electric charge. It is the charge transported by a constant electrical current of one ampere in one second.

C comes into plays in capacitance, the storing of charge. C is also the amount of excess charge on a capacitor of one farad charged to a potential difference of one volt.

These basic units of electricity, the coulomb and the ampere (the amp), were named to honor Coulomb and Andre-Marie Ampere. Both Coulomb and Ampere are among the seventy-two names inscribed on the Eiffel Tower. Which seems particularly fair to Ampere since his father was guillotined during the French Revolution.

The basic unit of electricity, the farad, was named to honor Michael Faraday. Being a Brit, his name is not to be found on the Eiffel Tower.

An international convention in 1881 started the naming of electricity. They came up with the coulomb, ampere, ohm and watt, the later two after George Ohm and James Watt.

Coulomb is best known for his seven memoirs in electricity and magnetism which extended Isaac Newton's work to new areas. And for Coulomb's Law, which was critical to the later work of Carl Friedrich Gauss and James Clerk Maxwell. Without which there is no electric utility industry.

Speaking of James Clerk Maxwell, he was born on June 13, 1831, in Scotland. Maxwell's Equations have been referred to as the second great unification in physics after the first by Newton. Electricity, magnetism and light! What more could you want? (Ask Albert Einstein that.)

Arguably the third greatest physicist of all time, after Newton and Einstein, his impact was huge on the developments of electric utility service in the second half of eighteenth century. In his spare time, he proved that the rings of Saturn were not solid but composed of numerous small particles. And he even invented color photography.

Maxwell, Gauss, Ampere, Faraday and Coulomb formulated the theory that the engineers like Thomas Edison and Nikola Tesla used to bring us engines, motors, transmission and distribution. Maxwell's four equations include Gauss' Law on flux, Gauss' Law on magnetism, Faraday's Law on induction, and Ampere's Law on circuits. Gauss' Law on induction can be used to derive Coulomb's Law and vice versa.

And speaking of Edison, the Wizard of Menlo Park had 1,093 U.S. patents, including his first on June 1, 1869. It improved the voting machine for legislative bodies. Perhaps the U.S. Congress can get one.

In our industry, we talk about his patent of June 14, 1881 perhaps more than any other. No, not his patent of the light bulb. It was the electric meter that was patented by Edison in June of 1881, leading to a near infinite number of hours since of discussion, debate and dispute.