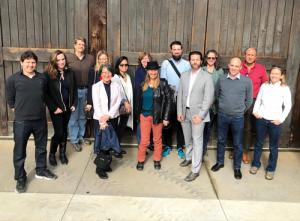 PUF's Steve Mitnick: Give an overview of this resiliency and microgrids team, what it's composed of, and its purpose.

Commissioner Genevieve Shiroma: I have been a regulator for over forty years, so I have worked from the ground up. I could have been one of Forest Kaser's [Supervisor, Resiliency and Microgrids] team members at one point.

The CPUC has a lot going on. We are heavily governed by code, precedent, and evidence. Everyone is working hard.

When a team like Forest's asks, what else can we do with a law that says make microgrids mainstream? We make it happen with interconnection, tariffs, and all these things. Then they say, in the broader landscape, this statute didn't specifically require resiliency, but it was a natural fit. 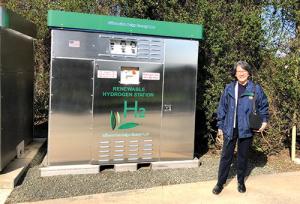 Looking ahead for California, what role can microgrids play in the resiliency of the grid in keeping the power on? It's something that isn't always evident in an organization like the CPUC, or regulators aren't necessarily viewed in this fashion, but it is beautiful to see from my perspective.

It's analysts and engineers, plus all of the legal folks coming in and saying, this program can get larger than us. Let's make it happen. That's it as far as utility scale.

So, we wrote it out in a decision and adopted a staff proposal. That was in June of 2020. By the fall, PG&E had launched numerous utility scale microgrid configurations at substations that saved thousands of people's electricity, also during the public safety power shutoffs. In terms of peace of mind, this was phenomenal speed from the time the decision got out to the time the utility implemented it.

Leuwam Tesfai: The CPUC has taken a two-pronged approach to innovating in the area of microgrids to support resilience. On one side, we've taken this approach of authorizing our utilities to leverage microgrids. 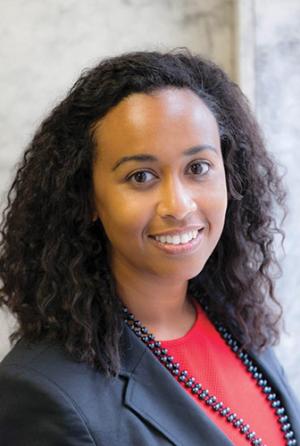 Leuwam Tesfai: We’ve supported the utilities in microgrid innovation but are also trying to empower third parties and customers to be able to develop their own microgrids.

That includes leveraging technology at substations to enhance resiliency during public safety power shutoffs. That's an area of resiliency need in California in order to help mitigate wildfires.

The CPUC included the authorization of the microgrid incentive programs. That's a two hundred-million-dollar program to support microgrids in disadvantaged communities and those hardest hit by the public safety power shutoffs. Those are communities located in areas that tend to have their electricity shut off to mitigate wildfires.

The other side is less focus on utility ownership. It's the development of microgrids by third parties, or non-utility entities. Our approach has been one of streamlining interconnection processes. We've had some existing tariffs that needed refinement, and we're also developing a new tariff specific to microgrids to support commercialization long-term.

These types of refinements create consistency for customers looking to potentially develop their own microgrid. They'll know what the rules of engagement are with the utility and what to expect going forward. 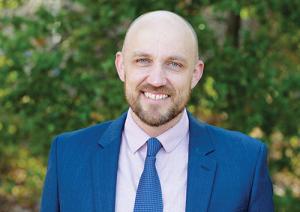 Forest Kaser: We’re trying to build in that equity perspective from the ground up, so we can make sure microgrids are an enhancement to universal access and affordability.

That might be for resilience. That might also be a form of electric bill arbitrage to take advantage of time-of-use rates, to deploy the battery on your microgrid during a time of day when rates are higher, during that peak time of use rate.

We've supported the utilities in microgrid innovation but are also trying to empower third parties and customers to be able to develop their own microgrids.

PUF: Forest, how do you all creatively work through this with the team and third parties, too?

Forest Kaser: We've tried to emphasize as a team throughout the two years we've been working on this, is having an open-door policy for stakeholders. I've always said any stakeholder who calls me or my team member, with ideas, and wants to move the conversation forward in a constructive way, is welcome. 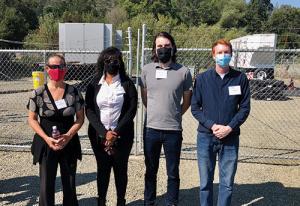 New PG&E microgrid in Angwin, California with the linear generator running on biogas and natural gas from Mainspring Energy and NextEra. This is a new microgrid bringing resilience to Napa County during Public Safety Power Shutoffs.

We have this ongoing working group process where since November of last year, we have a two to three hour working group meeting where Staff presents various topics. Often, we've invited presentations from the public or stakeholder groups, and we talk through the issues to get different perspectives.

We've had presentations from utilities. We've had linemen in to talk about, how do linemen think about safety issues related to microgrids, what new risks could microgrids pose to the workers, and how do we mitigate those risks?

How do we adapt our regulations, policies, and practices to harness the benefits that microgrids will provide, while continuing to prioritize safety, affordability, and equity?

These working group meetings have helped us all build our shared understanding of what the issues are, where the pinch points and challenges are, and hopefully they prepare everyone to better craft proposals when it comes time to submit those into the formal process.

PUF: How big an impact can this be on the people of California and the customer?

Forest Kaser: I see a lot of promise in areas that are high risk for wildfires, called high fire threat districts. There's an effort by one of the utilities, and now a second utility is joining in, to establish remote microgrids and remove distribution lines in certain places altogether.

It's in these remote areas where there might be one building, two buildings, or a handful of buildings and a long distribution line running through a highly forested and very fire prone area. The utilities are looking at decommissioning that line altogether, removing the poles and wires, to one hundred percent eliminate the fire risk from that infrastructure.

They'll be replacing them with small microgrids. The plan and committed tariff requirement are to provide the same power quality and level of service to their customers they would have had otherwise.

It maintains the relationship customers have with their power supplier, whether it's a community choice aggregator or an IOU. It's neutral, so it's to maintain the existing contractual relationships, safety standards, and power quality standards, but it's actually cheaper. The utilities are finding it's not only a reduced fire risk, but at a lower cost. How do you measure the scale of impact?

For those areas, you're potentially moving some high-risk lines, so you've got a lot of positive benefits, even though the total number of people served is small, because it's a small number of homes. But the risk reduction impacts could be significant.

PUF: Because of your work, is there a lot of interest on the part of investor-owned utilities and third parties to say, we want to bring some projects in?

Forest Kaser: Yes. Just in terms of third-party, note that for those remote grids, the utilities are working with third parties to design and build those microgrids, so it's not exclusively an in-house utility activity. There's business development around selling these types of microgrids to the utility.

Some of the rules and regulations the Commission has adopted in the microgrids proceeding are based on initiatives that other entities have taken, so they're inspired by real world examples.

An example is the Port of Long Beach in Southern California. The Port requested a special permission to provide power across the property boundary to a neighboring facility. One of the rule changes we made was to make it possible, without having to go through a special request process, for parties to be able to do that type of project.

There's a lot of interest by local governments and community groups in looking for projects, and we're hoping the structures we're setting up make that easier for customers to engage with the utilities to move projects forward.

PUF: What lies ahead, especially for the interconnection rules?

Commissioner Shiroma: There's a lot of work ahead. The work is not complete. A team like Forest's, where there is the aspirational, the innovation, and the thinking ahead �" what role can microgrids play in the larger picture of our grid? Forest has outlined a number of amazing projects.

Along with that are the fundamentals, the basics of safety, electrical engineering, of the long-standing utility rules and requirements all geared toward safety, but in that, what have we learned over the years that can be used toward a faster processing?

There is a hunger for these kinds of projects. There's a hunger by the developers, local governments, tribal governments wanting more transparency from the utilities, and so navigating all of those granular particulars is something the team is paying attention to, because, in the end, we want to have a safe grid. There are more pieces to this puzzle ahead.

Leuwam Tesfai: A lot of our work had been focused on California Senate Bill 1339, and we've been able to have a number of short- and long-term wins in relation to that legislation.

Going forward there's still a lot of work to do related to the microgrid incentive program, focusing on communities that might not have the resources to leverage and make their own microgrid. There are some wealthier communities that can do it on their own, so it's making sure we build in equity going forward.

The CPUC in 2019 adopted an Environmental and Social Justice action plan, so we've been working hard, in such a technology-centric area like microgrids, to make sure we're able to bring equity in.

Forest Kaser: Something easy to lose track of in this country is how universally available electricity is for most people. There are exceptions worth noting, like tribal communities.

We've been tuned to this issue, as done wrong, that can exacerbate inequity. We're trying to build in that equity perspective from the ground up, so we can make sure microgrids are an enhancement to universal access and affordability, an essential value proposition of the electric grid.

I'm excited about conversations we've been having with several national labs, including Dr. Bobby Jeffers' team at Sandia National Lab and Joe Eto and Peter Larsen at Lawrence Berkeley National Lab, about trying to improve our analytical basis for thinking about that equity issue. As we're trying to decide where is the right place for a microgrid, how do we build in access to essential services during emergencies?

Who has better access, who doesn't? Where should you be locating these microgrids strategically so when the broader grid goes down, you make sure everyone can access food and water, shelter, and medicine?

How can we bring a quantitative and rigorous analytical perspective to thinking about the problem? It's building that shared understanding about how we do this in a fair and transparent way so everyone can see the numbers, how we do our analysis, and it's not just an arbitrary hidden decision about who gets benefits and who doesn't.

That's an important key area of analytical and stakeholder work that is ongoing and will continue.