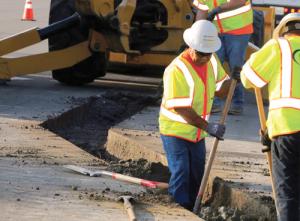 PUF's Steve Mitnick: What are some of the experiences you've had or projects with selective undergrounding?

Rajdeep Roy: While there are many different reasons why electric companies underground power lines, I'd like to focus on targeted undergrounding for wildfire mitigation.

For us in California, wildfire mitigation has been one of our top priorities as we face increasingly extreme weather conditions. We have a portfolio of system hardening strategies to make our overhead power lines more resilient to wildfire risk, including targeted undergrounding and replacing bare wire with insulated wire, which we call covered conductor.

I mention covered conductor because, considering SCE's diverse geography and terrain, it is currently the best mitigation that can reduce the greatest amount of wildfire risk in the shortest amount of time at the most affordable cost for our customers. 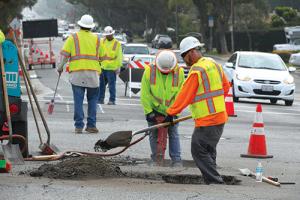 Much of our high fire risk areas have rocky, granite terrain. When you have power lines that go over mountains, undergrounding those lines can sometimes be infeasible.

California has diverse weather, topography, and vegetation. Utilities serving each region of the state have to take customized approaches to wildfire mitigation.

The biggest driver of an ignition risk we see on overhead lines in our service area is contact from objects, and covered conductor is estimated to be about seventy percent effective in mitigating this risk. We complement this effort by inspecting our highest risk structures more frequently and managing trees and vegetation around our poles and equipment, so they don't grow or fall into power lines. 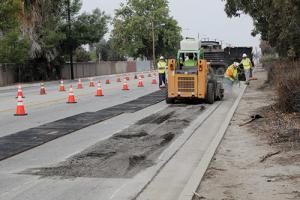 When overhead lines are placed underground, the type of construction involves longer lead times and more resources, reducing the amount of infrastructure that could be hardened within the same timeframe compared to installing covered conductor. While there's incremental risk reduction, you still have that additional remaining risk every year that covered conductor could have mitigated earlier.

2020 was a record year for wildfires, and this year has already seen more acres burned than last year to date, which is a direct effect of climate change. This requires urgent actions to reduce the risks that are increasing each year.

However, targeted undergrounding does have a role to play in our portfolio. We focus on areas where we believe covered conductor wouldn't sufficiently mitigate the wildfire risk. Considerations for undergrounding include locations that have limited egress or ingress, areas that experience extremely high windspeeds and are subject to frequent Public Safety Power Shutoffs, areas with a lot of high density tall trees, and/or areas where risk of overhead conductor failure is primarily from factors other than contact from objects. Our targeted undergrounding strategy continues to evolve and may lead to additional locations in the future.

Thuan Tran: Based on our current risk analysis, undergrounding is estimated to reduce about ninety percent of wildfire risk, while covered conductor is estimated at about seventy percent.

To gain significant mileage of undergrounding conversion, we are looking at ways to transform our undergrounding methodology, standards and construction methods, and incorporating new technologies to help improve deployment speed and affordability.

Angel Brito: Under Rule 20, we've been working with communities on undergrounding projects for both aesthetic and non-aesthetic purposes, such as new demand growth.

In 2019, we began targeting specific areas that would benefit most with undergrounding for wildfire mitigation purposes. This year is the first year we're starting construction for the projects that we began scoping in 2019. We plan to learn from this initial deployment and incorporate lessons learned going forward.

There's typically about a twenty-four- to thirty-six-month lead time for undergrounding projects, depending on the topography, local jurisdiction, permitting and other factors that play into the cycle times.

To be able to convert to undergrounding quickly, you not only have to deal with the construction but also permitting and potential environmental requests.

PUF: There's been much learning at your company and throughout the industry to where these methods are more reliable and cost-effective. Talk about those.

Rajdeep Roy: Even with targeted undergrounding, we want to see if there's a more appropriate way to do it and if there are technologies that are available that can facilitate faster deployment.

For many years until the early 2000s, we used cable-in-conduit. That was our undergrounding standard, where you're pulling cable with the conduit, trenching and installing at the same time.

We realized over the life of that technology that there are potential reliability issues when you just lay the equipment in the ground. It can bend among the rocks and soil and be susceptible to dig-ins. When faults occur, it can be difficult to locate the issue and result in longer outages because the underground cable is not secured like our current standards.

Our engineering team benchmarked with other utilities at that time and decided to pivot. We transitioned to rigid conduit with duct bank construction. The duct banks are enclosed in concrete encasement with conductors pulled through the PVC conduit, which makes it sturdier. Every so often, we have structures, manholes or vaults where we can get in after a fault occurs, pull the cable out, and put a new one back in.

Compared to the longer underground cable segments with cable-in-conduit, the shorter segments with duct banks makes it easier to identify faults, resulting in shorter outages and better reliability. That being said, some time has passed and that is why we are benchmarking again with other utilities on the latest technology and methods to underground our infrastructure.

PUF: Thuan, for benchmarking, as you're looking around for advances around the country and best practices, what are you finding?

Thuan Tran: From an engineering perspective, we benchmark nationally and internationally.

We went as far as Australia, Europe and East Asia to learn about their construction methods and standards for covered conductor. Then we tested the technology, established our engineering and construction standards and continue to monitor the system and make improvements from lessons learned.

For undergrounding, we're benchmarking with industry groups like EPRI and EEI and other utilities like Dominion Energy and WEC Energy Group.

We also benchmark with construction companies, suppliers, and contractors. In the last three decades, folks who built fiber optic lines have been doing the most undergrounding in the country. We are learning from the cable manufacturers, the same companies that helped us redesign the new generation of robust covered conductors.

We are learning about new technologies, including the new generation of cable-in-conduit. We will be using this learning and benchmarking to review and revamp our underground standards, the same way we revamped our overhead system standards to accommodate covered conductor.

For example, we learned that for excavation, trenching and drilling technologies, there is no one-size-fits-all approach. It's a combination of several technologies.

When you think of trenching, you typically think of using a backhoe machine. But there are additional methods and new technologies to explore. We've learned about rockwheel trenchers that can cut into most types of rock at a relatively fast speed. Horizontal directional drilling technologies that can drill under flood channels. Plowing methods that can open trench and install a conduit at the same time. We're also researching new undergrounding technologies such as an emerging drilling technology that uses plasma technology to cut through granite.

With cable-in-conduit, we've seen improvements of the thickness of the conduit material and the cable design.

Undergrounding may seem appealing because it's, out of sight, out of mind. But it comes with challenges. It is more difficult to locate underground cable failure and perform repairs, which results in longer outage time for customers.

That's why we are exploring ways to improve how we locate underground cable faults. We're benchmarking with WEC Energy Group, a utility in Wisconsin that has been using a GPS sensor to map out their underground cable.

The sensor automatically uploads cable location data to their map and server. If the cable fails in the future and requires locating a fault, the GPS-based mapping information would help locate the cable.

Rajdeep Roy: We continue to learn from our industry peers and improve our undergrounding practices system-wide. However, I'd like to highlight that in terms of reducing wildfire risk, we have yet to find a technology solution, at least right now, that would make the undergrounding costs and deployment speed hurdles change so dramatically that we would shift away from pursuing covered conductor first before undergrounding, except for targeted locations that meet some of the criteria I mentioned earlier.