Duane Highley is the CEO of Tri-State Generation and Transmission Association. Clint Vince is Dentons Chair for U.S. Energy Practice.

Public power and cooperative power are big in our nation, and part of the future of environmental, social and governance issues. To find out more, PUF turned to Tri-State Generation and Transmission Association, a cooperative power supplier of forty-five members. That includes forty-two electric distribution cooperatives and public power districts serving over a million electric consumers, in four states. Yes, it is named Tri-State. Moderated by Dentons' Clint Vince, CEO Duane Highley explains what is happening with ESG in the company's large service territory. 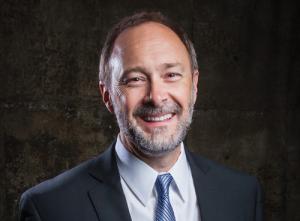 Duane Highley: Tri-State's journey started shortly before I came on board in 2019. The board said they wanted to make a clean energy transition and do it while respecting our coal-dependent communities, and while lowering rates so that everyone would benefit from the energy transition. That was a tall order, but one I was excited to take on as I became CEO, and we have fulfilled the board's goals through our Responsible Energy Plan.

The board said, get greener, reduce rates, take care of our communities. That's not easy to do. But we're getting energy now at a lower cost than any fossil fuel we could burn, with one thousand megawatts of new wind and solar coming by 2024 at an average price of 1.7 cents per kilowatt-hour.

It's far below what we can burn fuel for. With this green energy dividend, we have the headroom to help us make wholesale rate reductions. We're closing coal facilities and accelerating this transition. We closed the Nucla coal plant at the end of 2019 in Colorado, we then closed the only coal plant we had in New Mexico, the Escalante Station plant in 2020.

We've announced the closure of the three-unit Craig plant in stages, which is our only coal generation we have in Colorado, by the end of this decade.

We just announced a four percent wholesale rate decrease that's been approved by FERC. We're reducing costs while making power greener, and we're taking care of the communities that are left behind.

Look at Grants, New Mexico and the area of Escalante Station, and the counties there, McKinley County, and Cibola County. They were dependent on the jobs out of that coal plant, over two hundred jobs, the best paying jobs in the region.

In the case of Escalante Station, we've contracted for a two-hundred-million-dollar solar investment to help restore a tax base that's otherwise lost. We hear from the library and the schools, and they're concerned, how are we going to stay funded when Tri-State was such a big part of the tax base?

Our DNA is ESG. Co-ops have always been built around the seven fundamental cooperative principles. In the co-op circles we say number seven, and everybody knows that means concern for community.

We live it because we're governed by our members in those communities. We work for them, and they say, take care of us, don't leave us behind. That drives our renewable investment in our members' service territories.

Then we have research investments. We're focused on attracting research on the ground at these former coal sites where we can transition them to energy storage sites. They've got all the infrastructure and exceptionally good locations in terms of the transmission grid in the West.

We're focused on new storage technologies that we can run for days. It's not going to be lithium ion; it's going to be something beyond that. It might be hydrogen, or ammonia, or some kind of big molten salt technology. But we're putting our efforts to get that research located at those plant sites.

We've announced our desire for Craig, Colorado to be an energy research hub for green hydrogen. An independent assessment said it's the best location in United States in terms of cost for developing green hydrogen.

We've also partnered with EPRI and what they call Farm in a Box, so we're doing indoor agriculture demonstrations near plant sites in Colorado and New Mexico. Local high schools, community colleges, and universities are involved in the research, like how indoor ag can eliminate food deserts.

We can grow what local restaurants need so we're not transporting it all from California or Mexico. Those are local jobs that restores tax revenues and builds capacity in the community.

Duane Highley: We're having fun promoting electric vehicles with our members, and I'm excited about the new Ford F-150. It's going to be a higher performing vehicle than the existing Ford F-150 which everybody loves.

The expanding options for electric trucks are going to drive demand for electric charging infrastructure in our rural areas in a way that hasn't been driven before. Our members are already saying they're interested in those trucks.

Now, if you look at charging stations in the map of the West, they're concentrated in urban areas. If you want to drive across the West, it can be a challenge in an electric vehicle, especially as you're crossing the continental divide, as charging stations are hard to find. Range anxiety is a serious issue in the West.

We're providing funding so all forty-two co-op and public power district members across the four states we serve can put in a level three, high-speed DC charging station in their area, so that's going to help fill in the map.

Then, go buy your electric F-150. It accelerates faster than any gas motor.

It has more storage, because when you open the hood, there's no motor. It has six electric outlets of one hundred and twenty-volts each, to plug all your power tools into. This is going to change the game in rural America.

Clint Vince: What reaction did you receive from your board when you first laid out your ESG plan?

Duane Highley: We had enthusiastic support. As I said, ESG is our DNA as a co-op. We're fortunate we've always been about supporting our members, and what do they care about?

They're farmers and ranchers, they believe in conservation of the air and the water, democratic governance, and returning back to the communities that support us. Where we operate plants and substations, those communities are supporting us. We give back; it's just what co-ops do.

Clint Vince: What obstacles have you encountered in moving forward?

Duane Highley: Just look at Tri-State, a badly named cooperative that actually serves in four states. We have diversity of opinion among our members on energy policy.

For Wyoming and Colorado, I can drive from my home and be in either. In thirty minutes, I can be in downtown Denver, or in an hour I can be in Cheyenne. Those two capitals are so close, and they can differ greatly on energy policy.

Wyoming cares deeply about their energy economy and their policymakers are looking at innovative ways to preserve it, like carbon utilization. Colorado's policymakers are focused on transitioning their energy economy and passed an eighty percent decarbonization goal by 2030. That also reflects to a large extent the opinion of our members in those states. How do we get those members in these states together?

What they all agree on, no matter who you talk to is they want reliable and affordable power. That's been the key for us, to building consensus and support for the Responsible Energy Plan is that we can do this transition, save money, and preserve reliability.

Clint Vince: It sounds as though your plan might have had a unifying effect.

Duane Highley: I'd like to think that that's true. We had more votes on this transition, and they were either unanimous or all but one out of forty-two members were in support. That's a clear sign we're moving in the right direction.

Clint Vince: I'm told that Tri-State had a formal ESG initiative. It was written down and expressed more than a year ago, essentially.

Duane Highley: That's correct. We went to our board and said, this is information that our insurers and our lenders are requesting, and we think it's congruent with what we're already doing.

We're documenting what we're doing and put it in the form of an ESG report. To my knowledge, we're the first generation and transmission cooperative in the nation to do one. It's on our website.

It's been well received by the insurers and the lenders. Those are the two that had the loudest requests for it. But it's what we've always done. It's just putting it in the format of E, S and G. It's easy for us. The governance part is how co-ops worked to begin with. We're member governed and member owned.

For the social part, we reflect the diversity of our membership. If you look at Tri-State, we have a diverse membership and the fact that they can be democratically elected from all the regions is something I treasure. And as a not-for-profit co-op, we are focused on the well-being of those we serve.

Clint Vince: How do you deal with the water, wildfire, and other environmental risks?

Duane Highley: We talk about our risk management plan in our ESG report. One of the key areas is water. Water is essential in the West, to both the communities we serve and power generation. We have a committee of our board that's working on land and water issues.

One issue is as we close coal-burning facilities, which use water, is that water is eventually going to be available for other uses, and what is that going to be? Everybody has an interest in that in the West, and it's something our board is being deliberate about providing policy guidance on.

For wildfire, in the West, this is an especially critical situation. We have a wildfire mitigation plan that's part of our ESG report.

Clint Vince: Is there anything else in your ESG report that is unique to co-ops?

Duane Highley: It's been our adaptation to the requests from our members for additional flexibility in their wholesale supply contracts, allowing them to have even more local generation.

While we have an all-requirements contract, which is typical for the cooperative movement across the nation, our members said they wanted the ability to source more projects locally, typically renewable projects in their backyard. We first made adjustments in our contracts before I came on board to allow members a five percent carve out.

We then planned what we call partial requirements options that have been filed with FERC. It allows members to self-generate up to fifty percent of their requirements. It's a ten-fold increase in what was available before, and a significantly greater degree of flexibility to determine their future, independent of power supplier. We're unique among most G&Ts in having that program in place, and among wholesale power providers in general.

Clint Vince: Reflect on this journey, and where you are now and working on these issues, how you feel about that.

Duane Highley: I feel called to a career in doing this. I've been working with co-ops my entire professional life. My wife jokes that I've been married to the co-op a week longer than I've been married to her. This is true, because I started my internship in 1982, one week before we were married.

Every day I came to work and tried to figure out what is the best thing to do to meet our members' goals. I believe in the purpose of this cooperative movement.

It's the best kind of governance for a utility service, where the members get to say how their money is spent. They have a direct role in governance, so I've been gratified to work for that. We've seen our members' opinions about energy change over these decades.