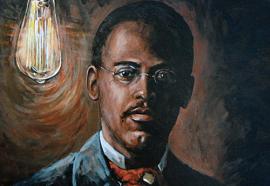 The great inventor and collaborator with Thomas Edison, Lewis Latimer, lived in Queens, New York when he was one of Edison’s chief competitors and later when Edison hired him. Latimer’s home was famously a meeting place for African American intellectuals, musicians, businessmen, etc. In the late nineteen nineties his home became a fascinating museum.

With Paul Kjellander’s painting of Latimer on the cover of June’s Public Utilities Fortnightly, we kicked off the campaign to develop a new permanent exhibition and interior renovation of the museum.