How suppliers and generators can each gain from today’s historic low prices.

That’s the question many industry watchers recently began asking after the Energy Information Administration (EIA) reported in April that, for the first time, power plants fired by natural gas had matched the nationwide share of coal-fired generation—32 percent for each. The April data was so surprising because, just two years earlier, coal-fired power had attained a market share of over 44 percent, with gas lagging at 22 percent.

The environmental and economic benefits from the rapid increase in gas-fired power have been considerable. International Energy Agency (IEA) data shows U.S. greenhouse gas emissions fell about 8 percent from 2006 to 2011, primarily due to switching from coal to gas in the power sector.1 Toxic air emissions (SO2, NOx, mercury) also fell apace. And, according to EIA, electricity rates also have remained relatively flat for three years in a row. 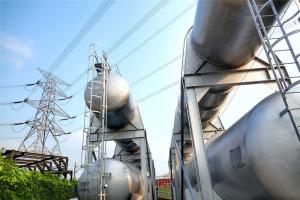 But again, what happens next? Will coal-fired power regain its historic market share, as some predict (see Figure 1), when natural gas prices trend upward? Or can gas-fired power continue to hold its own?

“Prediction is very hard, especially about the future,” Yogi Berra famously said. However, we think that if key stakeholders are prepared to make some modest commercial and regulatory adjustments, there is an attractive path forward for gas-fired power—a path that locks in today’s historic low commodity prices to deliver tens of billions of dollars of ratepayer benefits for years to come. The environment and public health also would be big winners.

The plan we favor is detailed in a new 45-page “Power Switch” report we authored earlier this summer for the American Clean Skies Foundation (ACSF), a Washington, D.C. nonprofit. It includes two major parts:

First, a new set of long-term gas purchase agreements—and associated hedging arrangements—that share some of the risk of future price changes between natural gas suppliers, on the one hand, and power generators and consumers, on the other. These new agreements would provide mutually beneficial incentives for gas suppliers and power generators. For example, suppliers and generators could agree to a fixed price for a portion of the fuel, with the balance priced at the market rate. (See Figure 4)

In April 2012, the Oklahoma Corporation Commission approved a competitive procurement rule that created new opportunities to enter long-term contracts for natural gas and other fuels. The rule created “an open, transparent, fair, and nondiscriminatory competitive bidding process” that would enable Oklahoma utilities to obtain a presumption of prudency for approved agreements.3

Second, a level, nondiscriminatory playing field for regulatory review and approval of prudent long-term natural gas supply agreements. That would allow regulators to judge options for gas-fired power generation on a fair and level basis vis-à-vis other power sources that routinely make use of long-term supply agreements (e.g., coal, renewables).

We have dubbed our approach the “no regrets” plan. By sharing the risk of future price changes, the plan seeks to minimize the potential losses and to maximize the potential gains for both gas buyers (e.g., utilities) and fuel sellers.

Time to Lock In

In many ways, the opportunity to lock in low gas prices is analogous to the opportunity that now exists for refinancing long-term debt with today’s record low interest rates. For example, according to Moodys Analytics, U.S. homeowners who have refinanced their mortgages over the past three years have already seen savings worth $46 billion in just the first year.

In a similar vein, we estimate that adoption of our plan could save generators and consumers billions of dollars annually if natural gas prices rise in the future. According to the most recent EIA estimates, the U.S. electricity sector will spend $320 billion for natural gas between 2013 and 2020.2 If 25 percent of this expected demand is met through long-term contracts based on today’s low price horizon, the overall savings to electricity users could be substantial: $16 billion for every $1/MMBtu that such contracts stay below average spot prices over the remainder of the decade. Under the long-term risk-sharing approach proposed here, even if average spot prices fall further before rising in later years, ratepayers might still be better off than relying exclusively on the short-term spot-market purchases that are commonplace today.

Our no-regrets plan starts with a basic question: With natural gas prices at decade-low levels, why have so few electricity generators jumped at the opportunity to move away from spot purchases to long-term contracts?

For the explanation, three different reasons seem to dominate: 1) loss aversion and status quo bias on the part of generators and gas suppliers; 2) a lack of regulatory incentives for generators to shoulder fuel price risks in the electric sector; and 3) basic conflicts of interest.

First comes the fear of being bound to an agreement that falls out of the money when prices change. No doubt that utility regulators and electricity generators would regret signing a long-term contract for $5/MMBtu if the market price ends up being $3.50/MMBtu. Consumers would be saddled with higher costs. On the other hand, gas suppliers would regret selling gas for $5/MMBtu if market prices end up rising to $7/MMBtu. Those suppliers would miss out on higher revenues.

Second, most electric generators have no incentive to enter long-term contracts because fuel costs generally are automatically passed through to customers (e.g., per a fuel price adjustment clause). By contrast, generators fear that regulators might disallow fuel costs if long-term contracts end up being out of the money, as with the example above. Thus, state utility regulations push most gas generators to rely almost exclusively on spot market purchases, even though coal-fired generators utilize portfolios of longer-term contracts with coal suppliers—which provide coal generators with fuel cost certainty and stability. 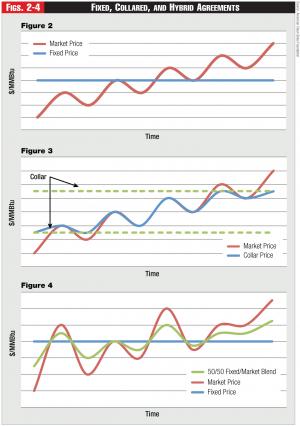 To move beyond these contract hurdles, the industry needs a fresh approach to long-term supply agreements based upon a hybrid price structure. That’s because traditional long-term contract structures such as fixed-price and price-collar agreements won’t likely satisfy the risk profiles and goals of both electric generators and gas suppliers.

Why? A simple fixed-price contract can be viewed as inflexible and risky because electric generators can’t take advantage of falling prices, and gas producers are unable to take advantage of rising prices (see Figure 2). And a price collar can still leave electric generators to deal with volatile price swings or premiums, depending on the collar’s width (see Figure 3).

Instead, effective long-term supply agreements should be designed to align the interests of sellers and buyers, incentivizing both parties and offering mutually beneficial protections from risk. To that end, a hybrid agreement that involves both fixed and market prices has promise. For example, buyers and sellers can agree on a fixed price for a portion of the fuel, with the remaining portion priced at market (see Figure 4). 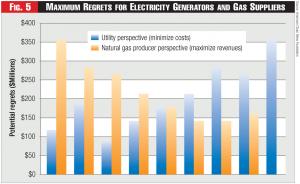 To illustrate how a hybrid agreement might work, assume a generator and gas supplier contract for a defined volume of fuel based on a 50/50 split between fixed prices and prices keyed to market. If the fixed price is set at $5/MMBtu and the market price is $6/MMBtu, the effective price of the agreement is $5.50/MMBtu. Blending fixed and market prices provides a level of price certainty, and allows electricity generators to take advantage of falling prices while also protecting them from rising prices. Conversely, gas suppliers have downward price protection, and can still take advantage of rising prices. Ultimately, a contract that blends fixed and market prices offers a risk-sharing mechanism that should be attractive to electric generators and gas suppliers, because the agreement minimizes risks of regret for both parties (see Figure 5).

Moreover, generators shouldn’t rely solely on long-term agreements for their gas requirements. Nor should gas suppliers sell gas solely in this manner. Instead, generators and natural gas producers should supplement their current strategies with long-term agreements—similar to the way the industry procures coal—as a way to reduce costs, air emissions, and risks while increasing resource diversity and supply certainty.

Five key classes of stakeholders must work together to successfully implement a no-regrets solution for natural gas power generation:

As a first step, state regulators should fashion a level playing field for all fuels and resources by developing defined procedures for competitive procurement. Colorado and Oklahoma commissioners have shown the way forward here. (See sidebar “Presuming Prudence”). 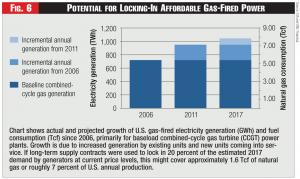 Second, regulators ought to reconsider the practice of pre-approving standard fuel-cost pass-through arrangements. Third, the regulatory review process should be expedited and also should remain flexible enough to allow parties to update bids if market conditions change quickly. Finally, an independent evaluator should participate in the process to ensure customers are receiving the best deal possible.

To provide utilities with the confidence needed to sign long-term fuel agreements, regulators also should provide generators certainty in the form of a presumption of prudence if the fuel is procured in an open and transparent bidding process. This process should apply to purchases of coal, natural gas, and other fuels, as well as renewable energy agreements. Of course utilities can bypass the competitive bidding process to purchase fuel and resources as they see fit, but such agreements shouldn’t be awarded with a presumption of prudence. With a foundation of regulatory acceptance, gas suppliers and electricity generators can develop simple, innovative, and mutually beneficial agreements.

So What Happens Next?

With record low natural gas prices, the U.S. electric power industry has a historic opportunity to deliver cleaner and cheaper power to the public for years to come—and, as shown in Figure 6, with a measure of gains locked in for both generators and gas suppliers. Opportunities abound for all the major stakeholders—suppliers, generators, pipelines, utility commissioners, and consumers—but only if they work together.