PUF’s Steve Mitnick: You are the chief counsel of the Pennsylvania Public Utility Commission. What are your major responsibilities? 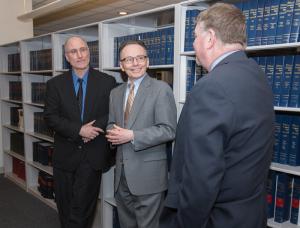 We also represent the Commission when they write regulations. The Commission must go through a very extensive regulatory approval process in Pennsylvania. A regulation moves through the Independent Regulatory Review Commission, the Senate and House standing committees, the Attorney General, and the Governor’s fiscal office during the promulgation process in the state of Pennsylvania.

PUF: How many people do you have on staff?

Buck Pankiw: We have twenty-one lawyers in my bureau. This includes three deputy chief counsels. One handles the electric industry, the natural gas industry and the pipelines. Pipeline issues are a lot more active than in prior years.

We’re about to get jurisdiction over the Pittsburgh Water and Sewer Authority, which includes an additional hundred and ten thousand customers. The system has had some difficulties. That’s why the legislature has decided to transfer the jurisdiction to the Public Utility Commission.

Regulating a new entity is a big lift for everyone involved. It’s a challenge for the Commission and for the people at the Pittsburgh Water and Sewer Authority as well.

The third deputy chief counsel also handles the variety of procedural, due process and ethical issues that come up within the Commission. Questions about procedure, questions about whether it’s ethical or not to do a certain thing, and other types of procedural issues.

PUF: You mentioned telecommunications, as well.

Buck Pankiw: Our jurisdiction is rather limited in the telecom area. It’s a very esoteric area of the law. We have certain issues that we’re working on right now, such as funding for the Connect America Fund, to provide universal broadband availability to consumers in the United States and, in particular, attempting to retain our state’s funding for broadband in Pennsylvania.

One of the state’s telecom companies, Verizon, has not accepted the federal broadband funds available to them. Those dollars that Pennsylvania consumers pay may leave Pennsylvania and go to other states. We have filed a petition with the FCC to get them to adjust their formula to favor those broadband providers that would provide those facilities in our state.

That’s to prevent the money that Pennsylvania pays to the federal government’s Universal Service Fund from completely leaving the state.

PUF: Pipelines have been an increasing concern. Why is that?

Buck Pankiw: The Marcellus shale formation has been a great boon to the natural gas industry and has had the effect of lowering wholesale energy prices. To transport that gas to where it’s going to be used, there’s a need for a lot more pipeline capacity.

There have been various proceedings to reconfirm or to adjust pipeline capacity to allow the product to flow to its markets. Some of the natural gas pipelines are under our jurisdiction, when they’re intra-state.

Others are under FERC jurisdiction when they are totally inter-state. If you’re building new pipelines, there’s also a question as to eminent domain authority, and there’s often some local opposition to the amount of construction work that’s needed, as well as the location of the pipeline.

For intra-state natural gas pipelines, the Pennsylvania PUC has the authority to decide whether the facilities are necessary for its public utility function, but the actual siting and eminent domain authority is generally dealt with by local courts.

PUF: What does your office do to get ready for this public meeting?

Buck Pankiw: It begins with the Pennsylvania Sunshine Act, which requires that all deliberations and decisions on agency business must take place at a public meeting. That requires the staff to prepare recommendations on petitions and adjudications that are coming before us, for review at the public meeting.

If it’s a petition, that might be handled just by the Law Bureau examining the petition and preparing a draft order to be circulated to the commissioners for them to review ten days in advance of the public meeting.

At the public meeting, the Commission votes to approve the staff recommendation, to reject it, or to have motions to change it in some way. Other bureaus have a different path of getting to the public meeting.

If it’s a complaint that’s filed, or a rate increase case that’s filed or a different kind of application that requires on the record hearings, that matter is referred to the Office of Administrative Law Judges. They hold evidentiary hearings, rule on motions, take in briefs, and write a recommended decision. Parties to that case can then file exceptions to the recommended decision.

At that point, the staff in the Office of Special Assistance reviews the exceptions and crafts a draft order for the Commission’s consideration, which is basically a recommended resolution, again, ten days in advance of the public meeting.

The commissioners review that draft order. They can approve it as drafted, or they adopt a motion to approve the draft order as amended.

PUF: Is your work done when the meeting starts, or do you take notes?

Buck Pankiw: Yes, I take notes. What normally happens is the director of the Office of Special Assistants presents each bureau’s items for review and approval in an organized fashion. The other bureau directors are at the public meeting in case there are any questions.

There are rarely any questions about the matters directed to the bureau directors, because the Commission has had time to review the matter and ask any questions offline before the public meeting.

PUF: Your responsibilities include working with the federal agencies – FERC and the FCC. FERC has certain issues they cover. They may affect Pennsylvania. How do you respond to that?

Buck Pankiw: I believe we have a credible and major presence at FERC regarding issues that affect Pennsylvania. We’ve always been interested in properly functioning wholesale energy and capacity markets.

We’ve intervened in those cases when those issues come up, especially in the PJM RTO. We also have addressed attempted state subsidies that affect the market clearing price in electric markets. That includes our intervention in court actions.

PUF: You’re saying the Pennsylvania PUC will often be pro-market in such disputes.

Buck Pankiw: We’ve historically been pro-market. We’ve taken the position that a properly designed wholesale energy market operated by PJM is the most efficient and economical way to provide electricity to consumers, and that the successful technologies and the lower cost technologies will win out in that marketplace.

PUF: You’ve been here for a year or two. How did you come to be chief counsel of the PUC?

Buck Pankiw: I spent many years as an attorney in the office of trial staff, handling rate cases. I enjoyed that very much. After ten years, I was promoted to deputy chief counsel, where I handled a lot of appeals, mostly in the field of ratemaking. I did that for a while. When the chief counsel position became open I applied and, fortunately, I was selected.

PUF: State commissions vary as to whether their decisions are reviewed by the courts or not. In certain states, it’s extremely rare. I get the impression that it’s not rare in Pennsylvania for a party to appeal.

Buck Pankiw: If a PUC decision is challenged, the usual venue is the Commonwealth Court of Pennsylvania, for state law issues. We’ve had many appeals over the years.

In the ’80s and the ’90s there were a lot of rate case appeals. They were taken to Commonwealth Court. In more recent years, a lot of the rate cases have been settled, so rate case appeals are a lot less frequent. I would say that the volume of appeals is less than it was perhaps ten years ago.