PUF’s Steve Mitnick: The Secretary is important at every commission. What do you do every day? 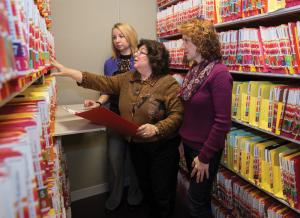 Rosemary Chiavetta: The Secretary of the Commission is a statutory position. All filings that come into the commission must be officially filed with the Secretary. It’s like a prothonotary, the chief court clerk in a court.

The second position that I fill is actually as the Secretary of the Commission – where I serve everything that is issued by the commission, such as secretarial letters, which also have the authority of law once I sign them.

I serve the recommended and initial decisions from the Office of the Administrative Law Judge. The judge will issue the decision, but I will serve it on all the parties. All orders, as approved by the commissioners at public meeting, are issued by my office under my signature.

I will have people that will call me and say, “I got a letter from you.” Well, what’s the letter about, because my signature goes out on about one hundred letters a day. But once they identify the docket, I can help them.

We have about two hundred different types of documents that can be submitted as filings. We usually get an average of about a hundred filings every business day. It could be a rate case being filed, which is huge. Or it could be somebody that has filed a petition for reconsideration of the commission’s order.

I have a staff of about twenty-four people. They will look at the filings, and decide what kind of filing it is and process it accordingly – then assign it to the bureau in the commission with the responsibility to review and act upon it.

We get formal complaints from customers against utilities for billing and service disputes. It could be an application by a company that wants to move an affiliated interest or erect transmission lines.

Or the filer wants to create a new substation, if it’s an electric company. Or a gas company wants to put in a new pipeline. Not a pipeline under Federal regulations, but if they have a Pennsylvania certificate of public convenience, they can come in here and apply to expand their facilities.

PUF: Your position must require you to stay cool and not panic. How do you handle unconventional notices?

Rosemary Chiavetta: The notice comes into our office and we give them an R-docket. There are different prefixes. The R-dockets are rate cases.

P-dockets are petitions – they’re asking the commission to do something. A C-docket is a complaint. An A-docket is an application that they want to expand their facilities or create new infrastructure. There is an M-docket that’s miscellaneous. It’s where everything else will go.

Most people now e-file. We have an e-filing system on our website where you can open an e-filing account free of charge. A lot of utilities will file confidential information with us and they can’t e-file it. You cannot e-file confidential matters, or confidential documents, because the e-filings are published on the website.

When we get these filings, there is a very specific set of procedures that my staff follows. They look at the document, look at the filing, see what it is, and then follow the procedures. If it’s a complaint, we will serve it on the utility.

That begins the complaint case, the litigation of that formal complaint. If it is an application that comes in here, we will process it. We will give it its docket number. Then we will let the Bureau of Technical Utility Services know the application has been filed, but we will prepare the notice of publication and take it to the Pennsylvania Bulletin, because applications must be advertised.

The protest period could be from fifteen to sixty days, depending on what kind of application it is. If it’s a filing that is very controversial or high profile, I will ask the Law Bureau to give me a ruling.

We submit the notice of publication in the Pennsylvania Bulletin, but I will also order the company to go out and advertise it in newspapers with local circulation. People will see it in their local region, and it gives them time to come in and protest or file comments. Once that protest period or that comment period ends, that’s it.

We always have public input hearings on something contentious, and that gives people another opportunity to go in and say something to the judge about the filing.

PUF: Do you have people say, “You didn’t give me enough time.”?

Rosemary Chiavetta: Usually it’s up to the discretion of the commission. If it’s a high-profile case, they give them more time. That’s a major duty of mine as Secretary of the Commission – to issue an extension period ordered by the commission.

The Right-to-Know law is a statute that requires agencies to follow certain procedures for release of public documents, while allowing thirty different types of exemptions for different kinds of information, such as critical infrastructure.

When somebody makes a request to me, then I have an internal procedure where I send it around to different bureaus where the records being requested might be located and tell staff to provide them to me. We have five business days to do that, but if it’s an extensive request, I can extend our response period by another thirty days.

We do get some requests where they’re not asking for just one thing. They’re asking for twenty or more items in one request.

It’s always good to have another set of legal eyes. They come in and review the documents as well, and we draft the response about what we’re going to disclose and what might be exempt.

Usually we get a hundred and fifty requests per year. But the requests sometimes are very involved and extensive. As I said, sometimes it’s not just one request. It’s thirty requests in one document, so it takes us time to put that together.

PUF: Who are the requesters? Are these students just curious about the world of utilities?

Rosemary Chiavetta: No. These are not students. I’d say fifty percent of my requesters are from out of state. They just want to fish a little bit, look at what Pennsylvania is doing.

I get a lot of requests for emails. Some people are big conspiracy theorists. They’re looking for the smoking gun. We do disclose emails if they are not exempt or privileged.

There’s also an exemption in the Right-to-Know law for deliberative matters, so if the commissioners are currently deliberating over a draft order or something, that’s exempt. It’s been an interesting education, learning this.

PUF: Is there a fun aspect to your job?

Rosemary Chiavetta: The fun aspect is that I never know what’s going to hit me on a certain day. I started my career in the legislature. I was a staffer in the Pennsylvania House of Representatives. Then I came over to the Commission in 1993 and became counsel to Chairman John Quain, when we deregulated the electric and telephone industries for competition.

Then I went into private practice for a while and came back in 2010. I was appointed in April of 2010 as Secretary of the Commission. In its one hundred-year history, I’m the first woman to hold that position. Somebody brought that to my attention and I said, “I just never realized that until recently.”

It does help being an attorney. A lot of legal matters go past my desk every day, especially with the Right-to-Know part of the job. I had to become an expert on that, not because I wanted to, but because I had to.

I’m also the keeper of confidential security information, such as infrastructure plans, maps, the gas fields, the pipelines – whatever would be considered information about vulnerable assets is protected. We have a special vaulted area for that material.

PUF: You’re the only one who knows the combination.

Rosemary Chiavetta: No. There are a couple of other people who know the combination. I don’t know it, which is probably best. But only very trusted employees and supervisors that I have under me have clearance with this information.

We don’t keep a lot of confidential security information anymore, because 2005 is when the Confidential Security Utility Protection Act was passed. Now, the utilities will keep that confidential information in their own headquarters, and our staff will go and look at it there. It’s much safer to do it that way.

PUF: Do you keep in contact with Secretaries at the other commissions?

Rosemary Chiavetta: Once in a while. I was asked what it’s like to protect confidential information. And what information is exempt. I did talk to some other Right-to-Know officers in other states. They didn’t call it Right-to-Know, though. The title there is Open Records officer.

Here they do have the state Office of Open Records, but we have a Right-to-Know Law. In other states, it’s an Open Records law. I met several Commissioners who were having the same problems. People on fishing expeditions want emails. At times, the amount of work involved is burdensome.

PUF: You mentioned maybe half of the requests are from outside Pennsylvania, so it sounds like a national thing.

Rosemary Chiavetta: It is. For some reason, people outside the Commonwealth want to find out what’s going on in Pennsylvania. And the cost of the Right-to-Know Law now, the legislature is looking at that. The Legislature’s Budget and Finance Committee is asking us, “Calculate what it costs you every year.”

It’s well to the half-million-dollar mark to gather and review documents each year. And then, you have appeals to your decisions and that takes more time and expense of the agency.

More requesters are appealing to the Office of Open Records in an attempt to chip away at the exemptions provided in the Right-to-Know Law. They’re constantly trying to look for little loopholes where protected information will be disclosed.

When people make a request under Right-to-Know, we do direct them to the website if that information is public. We have a huge amount of information on that website. We’re probably one of the most transparent commissions in the country.

The Pennsylvania Commission is over a hundred years old. We have documents going back to 1930. We’ve been converting our microfilm and paper historic documents to digital.

Then those documents are posted on the website. You could go look up a rate case from forty to fifty years ago and there it is. You can see all this information on our website. I think it’s excellent transparency, that you have that kind of information at your fingertips.