PUF’s Steve Mitnick: Paul, what is your job here at the commission? 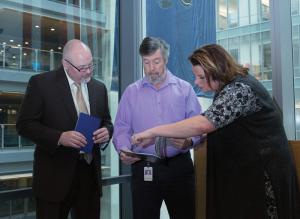 We’ve also got economic and energy planning because of Act 129, which required our electric utilities to have their customers reduce their consumption. That comes under our office.

We’ve got water, gas and electric reliability sections, which look at things like the electric industry’s SAIDI and CAIDI measures to see how quickly you’re restoring people’s electricity.

And, we also have telecommunications, which is a separate group.

PUF: You’re not doing all this work yourself?

Paul Diskin: That’s right. Rate increases come to us also. Any tariff supplement that someone files, and any time someone changes one word on one tariff, that must come through our group.

These things are all interrelated in one way or another.

PUF: Tell me about that. If there’s a rate application, how does that roll in?

Normally, when they’re a larger case and there are issues, the consumer advocate and/or the PUC’s independent Bureau of Investigation & Enforcement will file a formal complaint. When that happens, it takes it out of our hands and we have to send it to the Office of the Administrative Law Judge.

We’ve got plenty of small water and small gas companies that come in here. They do the best job they can to try to put the information together. We’ve got short forms for rate increase filings for both small gas and small water companies.

If in five or ten years they only want a ten percent increase, the other advocates won’t file a complaint. It will stay with us – so we’ve got to have the expertise to work those small cases, but also our large cases. We also provide technical assistance to help the judges.

PUF: If it is one of the big companies – PPL, PECO, Duquesne, Met-Ed – how are you involved?

Paul Diskin: When it comes in, we start reviewing it to see if it complies with the regulations. Once those complaints are filed, it gets sent to the Office of the Administrative Law Judge. They then ask for technical assistance.

Our analyst who started out with that case will probably stay with the case, but they’ll serve a different function. They’ll be in the prosecutory area. Most of our other people in this section are advisory.

I’m advisory. I do not get involved in any of these proceedings, so if commissioners want to talk about it, their assistants, or someone in another bureau, they would come to me or some of my managers who have not touched the case.

PUF: You’re either advisory and then the commissioners can ask you, what do you think? Versus prosecutory, where there you’re in the case with the administrative law judge.

Paul Diskin: They can ask me. They can’t ask the people working with the judge. They can ask me because I don’t get tainted, so to speak. One supervisor is tainted, because he’s the conduit between the office of the Administrative Law Judge and our staff. So, he cannot talk to the commissioners to help, but I can, and the rest of my managers can.

PUF: There’s a lot of work that goes into keeping that wall between the two sides maintained.

Paul Diskin: We’ve had situations where people are sitting in the same area. One would be helping the judge, and one would be on the prosecutory staff, but we work to safeguard those separate functions.

PUF: I was going to ask you what a typical day is like, but it sounds like it varies quite a bit.

Paul Diskin: It depends on the day. I came in on Monday morning and there was a woman calling me about a water company.

Their owner was going to walk away January first. That became the first thing on my agenda. That’s how I started off Monday, trying to track that down.

We get so many different utilities, and also rail incidents occur. Those all go through us also because we have a rail safety section.

On a day-to-day basis, besides the normal applications that get filed here, we’re working in telecommunications now with some of the broadband issues.

We’ve got other issues now. We have a group looking at the tax reform act, because technically back in ’86 when I was working for a water company, our companies were forced to reduce our rates.

Any time a statutory tax rate changes and goes down, you have to flow that to customers. If it goes up, you may file an increase. We will look at that when we can get our hands around it. We have to give our advice to our companies. Maybe this year, they must give back and file a negative surcharge?

PUF: How did you get to be the technical director of TUS?

Paul Diskin: I started out in the water industry in 1979 as a junior accountant, working for American Waterworks Service Company, in Pittsburgh. They had a corporate office out there. I was a continuing property records accountant.

I was the guy who looked at how many meters they had out there, how many services they put in, and what they did over the course of time. Back then, it was all on paper. There were no electronic versions.

I eventually worked my way into the management group and became the director of rates. Worked with people in the commission, then eventually relocated to Hershey because it was closer for doing business here.

Energy is a little bit different than water. Within a year, the water manager retired. They gave me the water section along with the energy section. Then back in 2010, we went through a management performance audit that said we should restructure. In the process of restructuring, the director decided he was ready to retire.

I said, I’m already running several of your sections. I thought I was the best individual at that point in time to take over the entire bureau, knowing that I had other people in telecommunications that had experience there. I didn’t have a background in that, but I had a good manager there, so I started out here as a manager running a couple sections and then eventually became the director of the group.

PUF: It sounds like you have a good number of people in these four groups.

Paul Diskin: We have seventy-five. The major issue, just like anywhere else, is that our workforce is aging.

PUF: Are you bringing in new people?

Paul Diskin: We’ve had a tendency in this department that as people left the highest level, we always brought in trainees. Hopefully you had other people who stuck around who could mentor them, along with the supervisor.

Five years later, whenever these other people were ready to move, we had somebody in place. That was always the philosophy in this bureau.

Most of our trainees come from other state agencies. In the twelve years I’ve been here, we always said we’ve got to work from the bottom up. As we lose these experienced people, we’ve got to bring in trainees. Some of them may have utility backgrounds, and some may not.

We also do a lot of cross-training here. Our finance group really doesn’t have any responsibilities to any particular industry. If we’ve got an overload of work in telecommunications, or in energy, they can assist there.

Our finance group basically does security certificates and tariff filings and some other agreements that may come in. We’ve always tried to cross-train, especially when we got to the point where the electric generation and natural gas marketers and brokers started to come in to serve customers. We needed everyone on board because everybody wanted a license.

Some of those people decided over the years they didn’t want to be in that business, but we still have at every public meeting, five to ten companies coming on to perform services in Pennsylvania. That surprised us.

We thought after several years, we will we meet our max and people who aren’t making any money will start dropping off. But we’ve continued to gain suppliers every year since I’ve been here. I think we started out with maybe forty in gas.

There are now over two hundred-plus natural gas suppliers. We also currently have over four hundred electric generation suppliers. A lot of those are marketer-brokers, who are trying to steer people into other plans. All the big companies have been here for a while.