Peter Asmus is an associate director at Navigant and a leading global expert on microgrids and virtual power plants. With twenty-five years of experience, Asmus is the author of four books on energy and environmental issues. He brings additional expertise in the integration of renewable energy to the grid and public policy analysis.

Natural disasters — hurricanes, wildfires and earthquakes — have accelerated in recent years, often compromising critical infrastructure, including vital utility systems. The promise embedded in the Internet of Things (IoT) concept that serves as the foundation of any Smart City is resilient and reliable electricity. Microgrids can play a role in keeping smart cities' critical facilities up and running while also supporting the needs of the larger utility distribution network. 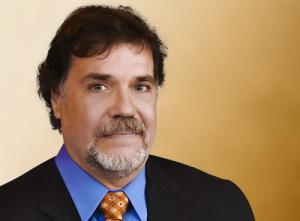 What exactly is a microgrid? Here is the definition as provided by the U.S. Department of Energy: A microgrid is a group of interconnected loads and distributed energy resources within clearly defined electrical boundaries that acts as a single controllable entity with respect to the grid. A microgrid can connect and disconnect from the grid to enable it to operate in both grid-connected or island mode.

The key distinguishing feature of a microgrid is its ability to island, to keep key smart city components — sensors, artificial intelligence engines, and machine learning data streams — operating, enabling a web of distributed intelligence to help steer traffic, optimize lighting systems and squeeze the most value out of distributed energy resources, whether they are owned and deployed by utilities or not.

A growing number of utilities view the microgrid they may own and operate — a utility distribution microgrid (UDM) — as the next logical extension of their efforts to deploy grid modernization technologies that dovetail with the needs of smart cities.

It is a networking platform that can be developed incrementally over time, and it enables utilities to both aggregate and optimize DER to help meet multiple smart city goals. Microgrids represent ways for smart cities to increase resilience while also integrating diverse DER — including EVs, thermal energy assets, and building loads — all orchestrated to offer resiliency, economic and environmental benefits to the larger utility distribution grid. 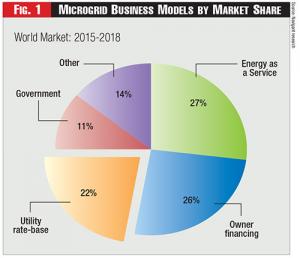 According to Navigant Research's Microgrid Deploy­ment Tracker 4Q 2018 update, approximately eleven percent rely upon government grants as a primary financing source. These funds are steered most commonly to critical facilities and community microgrids (most of which include utilities as co-developers, partners or investors.)

While the most popular business model globally is energy as a service business (twenty-seven percent), note that utility rate-basing comes in second (twenty-two percent), reflecting the growing acceptance of utilities being in the driver's seat on microgrid deployments.

While several utilities have successfully rate-based microgrids — SDG&E's Borrego Springs microgrid being the first successful deployment — many have also struggled. In 2018, however, ComEd ultimately succeeded in gaining approval from the Illinois Commerce Commission to construct a twenty-five-million-dollar front-of-the-meter microgrid supported by a five-million-dollar federal Department of Energy grant.

The utility that has had the most success with regulated investment in microgrids in North America is Duke Energy. In October 2018, the company filed for solar PV system in the Hot Springs community of Madison County in North Carolina to not only benefit the small community but the broader grid.

Along with localized resiliency, the microgrid will provide energy and grid support to all Duke Energy customers while deferring ongoing maintenance of an existing distribution power line that serves the remote town.

Puerto Rico, a U.S. territory, offers the most comprehensive regional microgrid plan, looking at both third-party and UDMs. Historically, the island has relied largely on older oil-fired generation to meet its power needs. This makes the price of power in Puerto Rico among the highest in the United States, second only to Hawaii.

The costliness of electricity on the island contributes to the attractiveness of microgrids that incorporate renewable energy. The island began developing its renewable portfolio with utility-scale wind and solar PV before Hurricane Maria hit. In the aftermath of the storm, islanding capability of generation resources has emerged as an important feature to ensure power reliability.

The Puerto Rico Energy Commission laid out proposed regulations for third-party owned microgrid installations on the island in January 2018. These regulations provide an official path for operators to interconnect their microgrids with the Puerto Rico Electric Power Authority and include a stipulation that microgrids must generate at least seventy-five percent of power from clean energy. These policies have been fine-tuned and project development is gaining important momentum.

For example, Navigant is a program manager for disaster recovery rebuild efforts on a project designed to encompass eight microgrids. One of the proposed microgrids is for the islands of Vieques and Culebra currently under evaluation, and consists of thirty megawatts of solar PV, fourteen megawatts of reciprocating engines, and eighty-eight megawatts per hour of energy storage. Both islands lost their power supply from the main island when undersea cables were no longer able to deliver electricity due to storm-related damage.

Each of these projects highlight how microgrids contribute to smart cities by increasing resilience, optimizing DER portfolios, and keeping critical data management systems online in the advent of an emergency.

They can become components in a broader overarching smart city framework, dividing up sections of any distribution system into resilient building blocks for a more sustainable energy future, while also bolstering overall resiliency of utility distribution systems. Smart city projects will increasingly lean on utilities, requiring these utilities to develop a forward-looking strategy to leverage both existing and new technologies.