Commissioner Sherina Maye Edwards was appointed by Governor Pat Quinn to a five-year term on the Illinois Commerce Commission. Prior to her appointment, Commissioner Edwards practiced as an attorney with Locke Lord LLP, where she focused on consumer finance litigation. She is actively involved in the National Association for Regulatory Utility Commissioners with several leadership roles in that organization.

PUF's Steve Mitnick: We talked a little bit about how the Commission and the staff here is diverse. It may be becoming even more diverse. Does that make a difference? 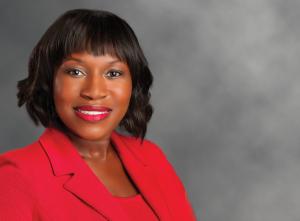 PUF: As younger people coming up, do you feel like there are some barriers?

Commissioner Edwards: I felt there were a few barriers when I first started out in my profession. I was at a large law firm. I was a fifth-year associate, on the lower end of the totem pole, and I was accustomed to the hierarchy being aligned with age. Although nobody mentioned age, having an older executive director and bureau chiefs twice my age reporting to me was awkward.

But then I decided I'm simply going to prove myself. I'm a young black woman, so proving myself is not something that's new. When I came to the ICC, I did my best to learn the industry. I did not want to be one of those hands-off regulators who comes in one day a week, gives other people a "to do" list, then leaves. Instead, I made it my business to be very present, to be educated, to know what I'm talking about, to be on the bench asking questions, to let people know that I'm about the business. If I wanted respect, I knew I had to earn it.

PUF: Are there any successes that you would point to and say, "That was a great day. I had an impact?"

Commissioner Edwards: There have been many good days. More on the substantive front, I led two sets of edits - one concerning charitable contributions that focused on the giving of the utilities. I also led edits in a water rate case that moved Illinois to a more level playing field for returns on equity for water companies.  That was significant.

On more non-substantive issues, establishing the Office of Diversity and Community Affairs was huge. I mean, that was just something that I think was a win for this entire agency. We basically said, with the support of our governor, that diversity is going to be a focal point. We're not only looking at diversity for our utilities, but we're going to put our money where our mouth is, practice what we preach, and look at our internal diversity as well.

Soon after helping establish that office, my first legal and policy advisor became the office's Director. Soon afterwards, she was promoted again. One of the biggest triumphs, if not the biggest, was the day she became the first African-American Bureau Chief of External Affairs. I think that was my proudest moment.

PUF: Do you have a typical day?

Commissioner Edwards: There's not one day that is just the same as another, although sometimes I wish there was, because then I could establish a routine, and it would probably be easier.

Our jobs are very meeting-intensive. We're either attending open (public) meetings, meeting with our staff or others within the agency, or meeting with stakeholders and utilities. Everyone wants a commissioner's ear. Our schedules are very tight, so we must be selective about how we spend our time to be productive and responsive to our duty as regulators.

PUF: Can you point to one or two turning points that brought you to where you are today?

Commissioner Edwards: I have a motto, and it's "dance like no one is watching." We should all execute to the fullest when no one is watching, as opposed to when we have a full audience. That's the most important part, and I think that's what happened to me.

I was apparently doing something that caught someone's eye. Unbeknownst to me that person then went to Governor Quinn and said, "I have this person and she'd be great for the ICC." They reached out to me. I was not seeking this. But then I spoke to a few mentors, and they said, "You cannot pass this opportunity up," so here I am.

PUF: Is it fun being a commissioner on the Illinois Commerce Commission?

Commissioner Edwards: There are so many different aspects to this job, but much of what we do is really collaborating and working together. Our work impacts the life of every single Illinois citizen.

It's a fantastic time to be in energy. The people that we work with, the overall staff at the Commission, I say they're the wheels on the bus that make it go 'round and 'round. We, the Commissioners, are the bus, and we cannot move the bus without the staff. They're phenomenal. We're blessed to have such a great staff.