Robby Demeria is Virginia Deputy Secretary of Commerce and Trade for Technology.

PUF: What is your job for the Commonwealth of Virginia? 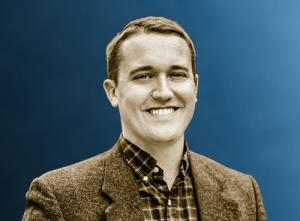 Robby Demeria: The best way to describe it is to give a brief history on the secretary positions in Virginia. In the mid '90s, under the Gilmore administration, the Secretary of Technology's office was created.

What's important about that is Virginia was the first state in the union to have a secretary of technology. During this time, technology supported government. It supported business. It was a vertical and having a secretary for technology was the right decision for the state.

Fast forward twenty years, and technology has transformed from being a supporting entity to a driving entity. Technology drives business, government, and innovation. Governor Northam wisely dissolved the technology office and moved IT services over to the Secretary of Administration and moved the forward-thinking, tech-centric economic development, new technologies portfolio to the Secretary of Commerce. In that process, they identified a new Deputy Secretary of Commerce and Trade for Technology and Innovation in the Commerce office and that's the role I'm currently serving.

What's awesome about this experience is, the government was essentially stating that technology is ubiquitous. It's a means, not an end. As a result, I get to work with many secretariats from Workforce Development to Transportation to Agriculture. That's a testament to the fact that technology and innovation should be at the forefront of all our secretaries, and all our agencies rather than siloed in a single office.

PUF: In Smart Cities, what have you been doing so far?

Robby Demeria: We started the Smart Communities Working Group near the end of the last administration. It's been in place for about two-and-a-half years. Broadband is the baseline requirement if we want to move forward with Smart Communities. The governor realized that early on and committed substantially to increasing those resources.

We're in the beginning of our general assembly session, so we'll see how this plays out, but we have proposed forty-six million dollars, in addition to an already appropriated four, so a total of fifty million dollars to assist in getting broadband to the last mile.

It's the largest investment in broadband for rural America to date. We're very proud of the proposal we've made. Additionally, through legislation passed last session, we've hired a Chief Broadband Officer to serve as the state's single point of contact for broadband issues. If you're in Lebanon, Virginia, down in southwest Virginia, or Loudoun County, in northern Virginia, you should have the same access to opportunity afforded by broadband.

While that's been taking place, we also, in August of last year, identified our state's first Chief Data Officer, Carlos Rivero. The Chief Data Officer is working to connect state resources, set data use guidelines, and coordinate data sharing among the state's sixty-three agencies. The agencies are working on how to better communicate with each other, share data, and increase services to our constituents through a smarter use of our data.

The Chief Broadband Officer and Chief Data Officer are the two advancements that we have done recently in the Commonwealth that are moving this forward. We've got several community pilot projects that are in the queue or already underway.

The two big ones happening now are a twelve-community fiber ring that's being constructed in Hampton Roads - and if you're not familiar with Virginia's geopolitics, Hampton Roads has a significant one making this project a huge achievement. The other one is the autonomous vehicle explorations that are taking place in northern Virginia.

We've got some exciting work in rural Virginia. In Botetourt County, which is right outside of Roanoke, they're working on leveraging a new work center that has a broadband connectivity for additional remote workers for jobs that sit in northern Virginia.

The City of Fredericksburg is converting legacy data to a completely new data analytics platform that will improve city services. The list goes on, but those are some highlights.

PUF: Where is this headed three to five years from now?

Robby Demeria: For a lot of these pilot projects, they are diverse when it comes to geography. We're piloting in northern Virginia, Richmond, and Hampton Roads, but also in Botetourt County, southwest Virginia, and Southside Virginia.

The idea is that we need to be able to have a proof of concept that can be replicated in other parts of the state. In the next five years we want smart communities to equate to economic growth, but we need that in every region of the state.

When Virginia was named one of the best states for business, it was during a time in which only one or two of our regions had economic growth. All other regions were declining. As we work to get back to the top, and that's where we want to be, we're going to do it with all regions of Virginia, not just a few.

Using some of these Smart Community initiatives will help us get there. Five years from now will be beyond our administration. Our goal is not to get as many wins as we can in the next three years, but to set Virginia up for success for years to come. These pilot projects will prove success and will give us better insight and knowledge on what works and what doesn't.

Five years from now, you'll see several smart communities and cities across the Commonwealth - not just the obvious ones like Arlington. That's a given.

The Governor has a ten-year goal to close the gap on those who are unserved by broadband. The Chief Broadband Officer said recently, that if we achieve our goal on the last day, or the day before the ten-year mark, we'd probably receive a failing grade. We need to close the digital divide as soon as possible, especially as it relates to smart initiatives.

PUF: Why is this important?

Robby Demeria: It's important for the same reasons why we've moved away from a Secretary of Technology, in favor of the idea that technology is in every agency, in every branch of government. The new economy is not going to happen sometime in the future. It's happening right now.

As we move forward, the conversation has shifted from the differences between blue-collar jobs and white-collar jobs, and lately it's been all about the new-collar job. The digitally literate workforce - a farmer, a mechanic, a nurse, or software engineer - all require a level of digital literacy, computational thinking, in the new economy.

It is so integral for our children's future, and the future workforce. You must remind yourself that it's 2019. We're nearly two decades into the 21st century. A digital literate workforce was need yesterday, not tomorrow.

It's why we talk about a lot of your members in the utility industry. We need strong relationships with our utilities to be able to continue to keep Virginia and the nation as an early adopter and at the forefront of new technologies that will grow our economy. So far, it's been a great relationship, and I look forward to continuing to work with a broad cross-section of stakeholders, state agencies, and communities throughout Virginia to achieve these goals.