Luiz Cheim was nominated for Fortnightly Top Innovators 2019 by ABB. 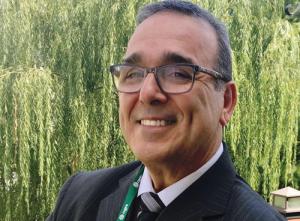 PUF: You are at ABB in the power grids division, transformers business line. What’s your job at ABB?

TCS is in charge of parts, and after sales providing service, repair, re-manufacturing of transformers, site tests, site investigations of problems, and internal inspections. All of that has been performed by the TCS organization.

PUF: Measuring all of that manually was time consuming and costly, right?

Luiz Cheim: Manual measurements can be extremely time consuming and expensive. I have spent a good portion of my career on the development of new technologies to support improvements in this area. These include new algorithms, new methods, and new transformer components. The robot was one idea I had around 2011 while I was on site, at a large substation, helping some ABB colleagues with assessment of the condition of some key transformers.

Their work was to perform an internal inspection of a couple of large units. This is a common practice in the industry to assess the condition or the operational risk of a given transformer, when there is a significant indication that something is wrong. Such procedure happens hundreds of times a year around the world. Let me explain what I saw that day.

The person doing the actual internal inspection in one transformer was a soon to retire colleague.

The conditions were bad. It was a hot and humid day. Thousands of gallons of mineral oil had already been drained out of the transformer and stored away.

The so-called inspection window of a few square feet was open at the top cover of the transformer and a ladder inserted from the top allowed the human inspector to get inside of a dark, tight, humid and confined space.

I came to see my colleague and he was tired and hardly breathing. The inspection is a dirty job. I said I am so sorry you’re going through that. He said no, this is my job.

That scene was my whole inspiration. In my opinion that is how inventions take place. There is always some coincidence or some sort of insight. Then I said to myself: this procedure is inhuman. We shouldn’t be doing it this way.

PUF: So, you created, with probably others, an inspection robot. Give us a sense of what it does and what it looks like.

Luiz Cheim: I was just telling you this story of how normal inspections were done and still are today, around the world. In every country, most manufacturers and users do this to help customers to understand what is going on with their transformers. But there are several problems with such a conventional inspection.

After draining, maintenance personnel can then climb on the cover and open the inspection window, which is normally wide enough to allow a slim body through. That is the beginning. The human inspector then prepares to get inside with special clothes, a mask and sometimes an oxygen canister to help breathe, given that the inside is still wet and full of petrol fumes. The inspector has to climb through the window, around the windings and supporting structures in a dark and wet environment, in a confined environment.

Later on, when the human inspector writes his report, those pictures will be analyzed by experts. That will include designers and people that understand the transformer inside and out. These are the ones that will then say if the transformer needs to be repaired, if it can remain in operation or not.

Then a decision is made. Let’s say, the decision was let’s close the transformer, pump the oil back, and eventually, bring it back into operation because it is not a serious problem. It can, perhaps, wait a couple of years, depending on the problem.

The oil, however, is an important component of the transformer. It serves two objectives. One is that it’s part of the electrical insulation of the transformer. The other objective is to remove heat from the windings. We want a good quality oil. The oil cannot be contaminated.

It must be in good shape without bubbles, particles, and foreign material. So, you have to treat the oil. You have to process the oil before you move it back from the truck to the transformer again. It’s a time consuming and expensive operation.

We know that oil companies use robots undersea, sometimes with arms to do actual repairs. So, I thought, why can’t we send something inside the transformer and have this machine do the inspection for us? There are so many benefits. For example, you don’t need to remove the oil.

On my way home, from that site inspection, I realized that if we kept the oil inside the transformer, we don’t need to process the oil to remove particles that may contaminate it. So, keep the oil there and let’s send a machine inside with the oil, so if you navigate there, that thing will dive and hopefully find the problem for us.

The third advantage, if we are successful, is that the whole procedure can be done in a few hours, instead of days. So, the customer will have the transformer back in operation in a matter of hours, not days, as is typically the case with human inspection. The advantages are huge, including the cost savings.

PUF: How was it developed? Is it being used at a few places? Is its use growing?

Luiz Cheim: I know there is a huge interest. Here’s how it was finally built.

ABB has a robotics group, which is in another division, and is not directly associated with transformers. I came up with the idea of the transformer inspection robot and helped in the spec to support the development but the group that carried out the development of the final product was our robotics team.

At ABB we have a database for innovations. Whenever we have a new idea, an invention, that may be patented in the future or turned into a new product or even improve an existing product, we must explicitly describe it there, the concept, the purpose, the problem that it solves, etc. That was the challenge I faced. How to describe something that had never been done before.

I built the concept from scratch in order to convert the idea into a product. I explored the concept of a saucer-shaped three hundred and sixty-degree still camera, which is UFO-like or similar that could navigate inside of a power transformer, like a submarine. Remember that size is of the essence. Internal spaces are tight and a big challenge for navigation.

But it had to be controlled from the outside. I thought of the videogame joystick and imagined it in the hands of an operating person who has a camera where the images of the inside of the transformer can be seen. Then came the idea of the product needing lights because the insulating oil inside the tank may sometimes be dark. I put all the pieces together into the final proposal for our ABB innovation database and that’s how it started. A project was initiated, and we joined forces with our robotics team.

It took us four years to get the first good images from the inside of a real transformer. That was our first prototype. Different from the oil industry, for example, you cannot take something that navigates in liquids and put it inside a power transformer because a transformer operates at high voltages. So, you have high electric fields. When you put this robot inside the transformer, when it dives, you do not want this device to contaminate the equipment.

Third, the navigation is controlled from the outside. But you don’t want the propellers to generate bubbles. For transformers, bubbles may be catastrophic because when you put it back in operation, if you have bubbles in the oil and they are near the high voltage side of the transformer, you may destroy the whole machine because you are affecting the dielectric strength of the oil.

All of that required a lot of development. Robots are common. There are robots that work underwater. But the robot for our application had to be a special robot.

That’s why it took us over four years to come to the final prototype.

PUF: What was the most rewarding aspect for you in accomplishing this?

Luiz Cheim: I’ve been around, with over thirty years of experience in this field. The most rewarding aspect was to have it developed as a product by ABB, from concept to the final product, involving two units that are completely different – power transformers and robotics.

We, the NAM Technology Center transformers team, generated the idea and provided the know-how that guided the robotics team in the development process of the product. But it was special in a way because it addressed a challenging problem with a novel solution.

Is it a huge advancement? I don’t know. But in fifteen to twenty years, in my opinion, nobody will do transformer inspections with humans. They’ll always be robotic and automated. So, to me this was a big realization as an engineer, as a research and development specialist, and as a scientist as well.