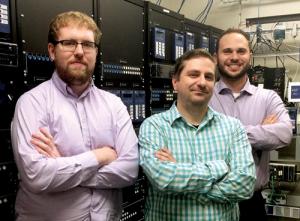 Mychal Kistler: I spent my first year at PPL doing transmission modeling and I've spent the past twelve years doing protection, mostly distribution, and some transmission. But I've branched out into a lot of other work, working on standards, relay testing, and things like that.

Patrick Barnett: I've been here about four years. Most of my background is in our relays on the distribution system, specifically all the pole-top equipment. I'm in our distribution protection organization with Mychal and I'm leading the deployment piece of this technology.

Ihab Salet: I've been with the company for five years. I started with PPL Electric Utilities automation and then I went into the field as a relay test engineer. After that I went into our operations department and spent some time there as an engineer and then as a shift supervisor.

Now I supervise our protection and control group and I have been here for six months.

PUF: How did this group come about?

Mychal Kistler: PPL began deploying large amounts of Schweitzer Engineering Laboratories relays on its distribution system around 2014. SEL's Arc Sense technology was in the relays, but at the time we weren't utilizing it. We and management thought we should try to use it. We investigated it a bit and ended up turning it on to see the results. That was the beginning.

PUF: What is Arc Sense?

Mychal Kistler: Arc Sense is a proprietary algorithm that SEL came up with around 2001. It's been around a long time. It looks at the harmonic current of the line and trends it over a twenty-four-hour period. It tries to filter out harmonic load and then it looks for deviations from those harmonics to count what arcing signatures look like.

PUF: How's that useful if there's a problem in a line, with this kind of equipment? Can it say, well normally this line looks like this, but something weird is happening.

Mychal Kistler: That's how it works. Now if you date back to Electrical Engineering 101 days, remember that current is just voltage divided by impedance. When you have a wire on the ground, it draws very little current, so there's no electrical quantity we can use.

Traditionally a utility's method to find these low-current faults was to use ground relays looking at line balance, but it's not always accurate. This was technology targeted to look specifically for down conductors.

SEL originally tested it in Texas with a utility. They did ten tests to come up with what a downed conductor signature looked like. Then a couple of years ago we did tests in Massachusetts, completing sixteen tests confirming SEL's initial results.

Patrick Barnett: I helped Mychal out in those initial years in terms of some of the testing we did internally with the logical algorithm we have on top of SEL's Arc Sense technology.

We built logic into our relays to interpret what the SEL Arc Sense algorithm was doing and are using that to safely and automatically isolate downed conductors.

It's automatically taking them off our system. Mychal was involved at the forefront with a lot of the testing and understanding of how Arc Sense was working. Then I got involved with Mychal when it got to the point where we needed to add logic to the relay. We had to make the relay as secure as possible.

PUF: Ihab, what was your piece of this?

Ihab Salet: All the credit goes to them. I came in at the time where we were trying to deploy it. I wasn't involved with developing the algorithm, but I helped facilitate deployment.

PUF: Tell me about that deployment because this is not just theoretical, right? You have it out in the field in Pennsylvania.

Patrick Barnett: One thing unique about the PPL system, and maybe it's not unique to the entire country, is the way our old metering infrastructure worked. At PPL, this is something we learned as we started doing the testing.

The way we read the meters was through a technology utilizing power line carrier. We'd inject harmonics at the substation onto the line to read back meter information from our customers.

By injecting harmonics onto the line, we were giving the SEL Arc Sense technology exactly what it was looking for, disturbances in the harmonics. We learned this up front and PPL is now at the point where we are replacing that older infrastructure with more advanced meters allowing us to take full use of the Arc Sense technology.

As we are decommissioning the old meter equipment off our system, we are also turning on the tripping piece of our algorithm in the relays. PPL has about one thousand three hundred feeders and we currently have the technology deployed in about fifty percent of our devices.

PUF: If there's a storm, or a car hits a pole, it comes down, and what happens? Walk us through that.

Patrick Barnett: I don't want to go too much into the details of our logic coupled with the Arc Sense technology working inside the relay. But essentially, if someone drives into a pole, or a storm knocks wires down onto the ground, traditionally on the system, depending where that conductor lands and what it comes in contact with will change how much short circuit current is available at that specific fault location.

So, we might only draw ten amps from our substation breaker all the way out to that wire lying in the grass. The current in that scenario is not enough to trip the breaker via traditional methods. Most utilities in the country, at least on the distribution system, are looking for high amounts of current to trip their devices, and a downed conductor draws a very low amount.

But what a down conductor does do is typically you'll find arcing or sparking. You could find videos online of downed wires in the grass and you'll see that behavior.

While that's not a lot of current, it is a certain signature in terms of the harmonic current on the line. That is what the SEL technology, the Arc Sense that they have inside their relays, is looking for. Then our piece is on top of it is saying, okay, under these certain scenarios, treat that as a down conductor and operate the upstream device.

PUF: Why is this a good project and what was most rewarding for you in working on this?

Ihab Salet: The most important aspect of the whole technology is safety. If you get a downed wire, you know the wire is hot or energized. If anybody gets close to it and touches it, that can be fatal.

Mychal Kistler: There are two aspects of that. Safety is the most important. Then, when you consider that the utility industry has been around over one hundred years and there's no solution to this problem, coming up with something, even if it's not one hundred percent, is rewarding.

Anything's better than zero. We put a lot of engineering effort into this and I was able to do things I've never done before. One was facilitating the test with seven thousand two hundred volt energized conductors on the ground. Figuring out how to do that was a good challenge.

Patrick Barnett: Safety is the main driver. But what makes this rewarding requires a story. Once we began enabling the tripping piece in our relays, the very first time it operated on our system it de-energized a section of line where we had a report from a customer claiming that there was a small fire from a downed wire and her husband was trying to put it out with rubber boots.

Whether that customer report was accurate or not, we successfully de-energized the line in a scenario where it normally wouldn't have been de-energized. The impact of potentially saving somebody's life is huge.