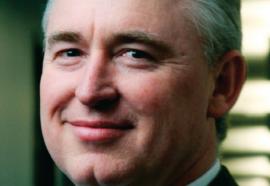 As president and CEO of ISO New England, Gordon van Welie has his feet planted firmly on each of two sides of a cultural divide. First, as a transmission system operator, van Welie must keep the lights on and the wires humming. At the same time, he must run a regional market—an ongoing experiment in freewheeling capitalism in an industry fraught with more long-term uncertainty than perhaps any other.