State and Future of Power: Kentucky

PUF: Tell us a little bit about what you do as chair. 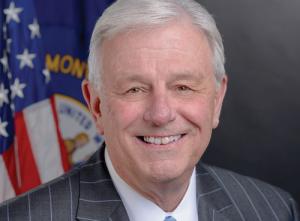 Chair Schmitt: The Kentucky Public Service Commission regulates the intrastate rates and services of electric, natural gas, water and sewage utilities. Our efforts are primarily devoted to adjusting rates, conducting safety and compliance inspections and monitoring the operating condition of the utilities we regulate.

As Chair, my duties include some general administrative matters, but most of my time is devoted to reviewing records and testimony filed in the cases pending before the commission. I also attend informational meetings with our attorneys and financial analysts, and preside over three to four hearings per month on average.

PUF: What about your staff?

Chair Schmitt: The commission is composed of three commissioners appointed by the Governor and confirmed by the state Senate. Our vice chairman, Robert Cicero, has a degree in accounting and an MBA. He is a small business owner and has worked in various managerial and financial capacities for U.S. Steel Corporation and its affiliates and as Chief Financial Officer and Treasurer of Aristech Acrylics.

Our staff consists of an executive and deputy executive director, an executive advisor and approximately sixty-eight members organized into divisions of inspection, financial analysis, general counsel and general administration.

PUF: What's your take on the electric power industry and regulation of the industry? How do you feel things are going?

Chair Schmitt: That is not an easy question to answer. In Kentucky, there are four investor-owned electric utilities and two generation and transmission cooperatives which are owned by their distribution co-op members.

Each has a defined service territory and the economic conditions in several of those service areas vary considerably. The March unemployment figures, for example, listed statewide unemployment at four percent, the lowest on record. Those figures reflect a vibrant economy in central and northern Kentucky where unemployment rates on a county-by-county basis are as low as 3.1 to 3.5 percent.

The electric utilities with service territories in those and adjacent areas are doing well. In eastern Kentucky, on the other hand, county unemployment rates fall into a general range between 6.2 and 13.9 percent. The dominant industry in eastern Kentucky has always been coal mining and with a decline in demand for Central Appalachian steam coal, the economy has been extremely depressed.

Between 2011 and 2017, Kentucky lost over eleven thousand coal mining jobs, with the largest portion of those losses occurring in the eastern coal fields. In western Kentucky, county unemployment rates are shown to be between 4.0 percent and 6.0 percent. Although western Kentucky coal has remained competitive in the steam coal market, that section of the state has also experienced a loss in coal mining jobs but to a lesser extent.

As might be expected, the economy in central and northern Kentucky, the so-called golden triangle between Louisville, Lexington and Cincinnati is strong, and the outlook for electric utilities is expected to be positive with slow but continuous growth over the next decade.

In eastern Kentucky, which has experienced significant losses in both population and the number of industrial customers over the last three to four years, utilities such as Kentucky Power Company and the distribution cooperatives are faced with serious challenges.

In a recent rate case, for example, Kentucky Power Company, which has a service territory in far east Kentucky, presented testimony that its customer count had declined by approximately twenty-three hundred customers in three years, and that most of its coal company customers had shut down operations. As a result, Kentucky Power and the distribution co-ops in eastern Kentucky have been required to spread the increasing costs of operations over a declining customer base.

In western Kentucky, Big Rivers Electric Corporation has struggled to mitigate the loss of two aluminum smelters as customers. The loss of those customers several years ago resulted in a load reduction of more than eight hundred megawatts.

PUF: You included in your list, two of the cooperatives, East Kentucky Power Cooperative and Big Rivers. In Kentucky you regulate them to some extent?

Chair Schmitt: In Kentucky, we regulate co-ops to the same extent as we do investor-owned utilities.

PUF: If you had to look forward for, say the next three or four years, how do you feel about the electric power industry in your state? Are you optimistic?

Chair Schmitt: Kentucky has seen an overall decline in the use of electricity of about twelve percent since 2014. The utilities located in central and northern Kentucky and the areas adjacent to them serve a population, for the most part, which is concentrated in and around urban centers which have experienced both population and economic growth.

Their load forecasts project low but continuous growth of one to two per cent over the next ten years.

In eastern Kentucky, load is predicted to steadily decrease over the same time period. Kentucky Power Company, for instance, reported a reserve margin of 33.58 percent for 2017 - 2018 and predicted an increase in reserve capacity to 48.06 percent by 2021 - 2022.

Big Rivers in west Kentucky has continued its efforts to deal with excess capacity by idling generation assets, selling into MISO and negotiating sales through bilateral contracts.

PUF: In parts of the state the economy can be spotty? And those are where your concerns would be most?

Greater industrial and commercial growth will be necessary for utilities located there to thrive in the long run. I must add, however, that the electric utilities located in both the eastern and western parts of Kentucky are well managed and have adopted aggressive economic development programs designed to lure manufacturing and commercial businesses into their service territory.

The joint efforts of state government and Kentucky Power Company have shown results over the last twelve months, with the announced construction of a $1.3 billion-dollar aluminum mill, which will be served by Kentucky Power.