AES Distributed Energy, a subsidiary of AES, commissioned a 4-MW solar project located in Dublin, Georgia. This system is the first of two solar PV projects being developed by AES Distributed Energy and its partners, collectively expected to supply 20 MW to the Georgia Power utility grid. The second, 16 MW project, is under development and is expected to be operational in the first half of 2016.

AES Energy Storage unveiled a portion of its deployment roadmap for AES Advancion Energy Storage Solutions, which includes the addition of battery-based storage resources across the US, South America, and Europe. Projects in construction or late stage development are expected to deliver 260 MW of interconnected battery-based energy storage, equivalent to 520 MW of flexible power resource, 25% of which is expected to be on-line by mid-2016.

NRG Energy appointed Steve McBee as the first president and CEO of NRG Home; Atlantic Power appointed Teresa M. Ressel to its board of directors; Marvin McDaniel becomes senior v.p., revenue group, and president and CEO of Northern States Power Co.-Minnesota at Xcel Energy; plus management changes at Southern Co., Duke Energy, Entergy Nuclear, and AES; appointments at the U.S. Department of Commerce, NARUC, Nexant, and the OpenADR Alliance; and others.

NRG Energy acquired Pure Energies Group, a residential solar industry provider; Duke Energy Progress filed with FERC for approval to purchase the North Carolina Eastern Municipal Power Agency’s generating assets for $1.2 billion; Trina Solar Limited signed a share purchase agreement to sell a power plant to funds managed by Foresight Group LLP; AES entered into an agreement to sell its 49.62% equity interest in a joint venture in Turkey; Southern Power acquired the 150-MW Solar Gen 2 solar facility in California from First Solar; SolarCity is planning to launch what would be the first registered public offering of solar bonds in the US; and debt offerings from Dynegy and ComEd. 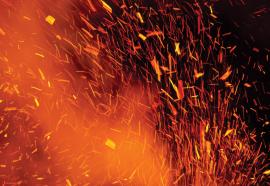 The industry’s transformation has begun. Should the F40 transform too?

(September 2014) Our annual ranking of shareholder performance tracks the long-term returns of leading utilities. But can it predict success in a transformed energy market?
Byline: