Google signed a deal with EDF Renewable Energy (EDF RE) to purchase renewable energy for its data center. The PPA will provide Google with the full output of the 201-MW Great Western Wind Project located in Woodward and Ellis counties near the base of the Oklahoma panhandle. The project will commence construction in the first quarter of 2016 and be fully operational by end of the year. Great Western will be comprised of 30 V117 (unit capacity of 3.3 MW) and 51 V100 (unit capacity of 2.2 MW) wind turbines supplied by Vestas.

Google plans to buy Vestas’ 12.5 percent share in Lake Turkana Wind Power, Africa’s largest wind park, when the project is complete in 2017. The share purchase agreement is in connection with U.S. Secretary of State John Kerry's Climate and Clean Energy Investment Forum and builds on a relationship between Google and Vestas, which also includes the 270-MW Alta Wind Energy Centre in southern California and the powering of a Google data centre in Finland. The Lake Turkana wind park is owned by Lake Turkana Wind Power.

Vestas received an order for 20 V110-2.0 MW turbines for a wind power plant in Gujarat State, India. The order for the Khambaliya project is an extension of an existing contract with Powerica Ltd., a power solutions provider in India. Among the 40 MW for this project, 12 MW constitutes an upgrade from a part of a previous order for turbines with the V100 platform, and the remaining 28 MW is newly added. The order includes the supply, installation and commissioning of the turbines, which is expected to be completed in the second quarter of 2016.

Siemens will provide the grid connection for an offshore wind farm off the coast of the U.K.; ABB will supply gas-insulated switchgear for substations in New Jersey; A team from the Microgrid Institute will design, simulate, and test microgrid control systems for two Maryland suburbs; Plus solar power developments by Xcel Energy, SunEdison, ReneSola, and Duke Energy; and others… 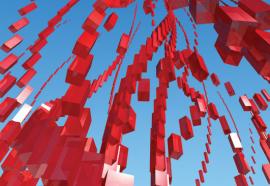