Tom Fanning is the CEO of Southern Company.

Don't let Tom Fanning's title of CEO of Southern Company deceive you. He has a long history with telecommunications too, with subsidiaries Southern Telecom and Southern Linc, making him especially knowledgeable on cybersecurity issues facing our nation's electric grid operators. 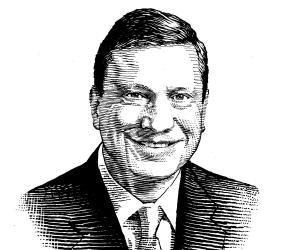 PUF's Steve Mitnick: Due to your national leadership on the Electricity Subsector Coordinating Council, or ESCC, you're a believer in the importance of upping the game on secure networks for utility operations and all the sectors. Talk about how important it is to be air gapped with the internet and have private LTE networks.

Tom Fanning: This principle of operation way precedes me. If you go back to the eighties, Southern Company made a practice of developing our own fiber networks. We never relied on the public networks in order to run our system. I believe we had over three thousand miles of fiber that we were putting in place to operate our system effectively.

With our enormous investment in this kind of technology, we felt it made sense because it was unique. We cover corn fields. We don't operate our system just based on dense population areas. We literally have coverage all over the Southeast and it's dense coverage.

We wondered if there is a way to spread the fixed cost over a bigger base. That gave rise to the formation of what became Southern Telecom and ultimately Southern Linc. When I was still a junior employee in the company, I became the first chairman of the board of Southern Telecom. We went through some iterations, but it has worked so well.

Our system is four function. It's phone, data, packet data, and push to talk. It is especially suitable for public safety that has to get off the highways and go on the back roads and be able to serve customers. As that strategy evolved, we did that for the pristine nature that we required in order to operate our systems better than even the standards of AT&T and others.

We also started to see the emerging threats of cyber and physical national security issues. All of a sudden, we started to say two plus two. That is, with the benefit we have in operating a private network the way we do, we also now create the added benefit of having a more secure system.

The operational aspect of this predated the secure aspect of other outside threats. We have added to the value of the system in that way. Now as we progress from the old iDEN Motorola system, we're moving to the 5G world, and we're excited about its promise for the system.

All four of the operating company presidents, which are the three electrics - Georgia, Alabama, and Mississippi - as well as Southern Company Gas, are tied in with our marketing people and also our technology organization in helping maximize the potential of this system.

PUF: With what the FCC is doing on May thirteenth, it may cause a gold rush of other utilities to do what Southern has been doing for a while. How's that good for the industry, the country, and even for Southern?

Tom Fanning: This is one of the things that we have been talking about relentlessly lately. Whether this is through my leadership role at the ESCC or my role on the Cyberspace Solarium Commission, we know there are billions of threats against the infrastructure of America every day. Big electric companies get hit millions of times a day.

What we've got to do is not only understand how to design a system that operates well during normal times. I call that reliability metrics. We also have to design systems that are resilient, and will operate well under unusual times, whether that's a hurricane, snowstorm, or cyberattack.

My sense is as we progress into this new telecom environment, it will open up a whole new level of security and resilience for this industry. It may also open up unintended business opportunities as technology changes, and customer requirements change. The nature of our product and its offering to customers may likewise change. This may prove to be a gateway to new businesses and help our current system.

PUF: We talked with NARUC President Brandon Presley. He's a real believer in rural broadband. He figures utilities can move the ball on that important national priority of rural broadband.

Tom Fanning: All of our operating electric utilities are thinking that way. Alabama in particular has made some big inroads in thinking about how to deliver that service to underserved communities.

This may be an old statistic, but something like forty percent of our customers make less than forty thousand dollars a year as household wages. I guarantee you they don't have the access to the kind of infrastructure that most Americans have. This notion of bringing this kind of infrastructure development to underserved communities will make America better for decades to come.

PUF: The resilience and breadth of utilities service is demonstrated in the current crisis with so many people at home. Imagine if we have to deal with cybersecurity and weather events simultaneously.

Tom Fanning: That's a hundred percent right. As Southern Company has moved into this environment, we have about thirty thousand employees, sixteen thousand of which are telecommuting.

Imagine trying to do your work at home, and if you're spread over a variety of locations, the challenge becomes much more complex. This kind of power in that environment is something that America needs.

PUF: You talk to other CEOs across the country often, and what would you tell them about what you've learned and the importance of this for them, their communities, and companies?

Tom Fanning: It's a broad message, and it's the message that the waves of technology innovation are hitting the beach relentlessly. We can't keep the waves off the beach. You have to make a simple choice.

Am I going to let other people innovate around me, or am I going to participate in shaping the innovation that affects my product offering to customers? There are two choices. The passive choice isn't a bad choice, but it is a choice that limits your opportunity to grow.

In a video complement to this article, the Executive Vice President for Operations of Southern Company, Stan Connally, talks with the PUF team about the power of utilities building their own private broadband networks and the opportunity afforded by the Federal Communications Commission’s May 14 order on 900 megahertz broadband for utilities nationally to seize the cybersecurity and other benefits of private networks air-gapped from the public Internet.