WASHINGTON, DC, MAY 13 — The Federal Communications Commission today made a key segment of spectrum available for electric utilities to use for the broadband data platforms that will support the modern electric grid. 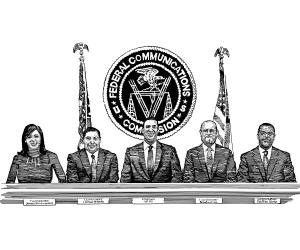 "For decades, this band has been allocated for narrowband communications like two-way dispatch radios used by business, industrial, and land transportation licensees," wrote FCC Chairman Ajit Pai in advance of today's action. "The new regulatory framework would allow 900 MHz licensees, like utilities, to obtain broadband licenses."

The FCC's action caps a five-year process to reconsider how it regulates a block of spectrum in the 900 megahertz band previously restricted to narrowband uses. Though some of that spectrum has been put to use by utilities and other industries over the years, it remains largely underutilized in most parts of the country. The spectrum is unused in about eighty percent of counties nationwide.

Because the frequencies are low-band, that is, below one gigahertz, the wireless industry considers them highly desirable, "beachfront" spectrum. It is also particularly attractive because it is one of the bands in which LTE, the leading mobile broadband technology worldwide, can operate. A number of progressive electric utilities, including Ameren and Southern Company, did not wait for the FCC's final decision and have been running LTE trials in the band using experimental licenses.

In 2014, the Enterprise Wireless Association and the largest holder of 900 megahertz licenses, Anterix, petitioned the FCC to reconfigure the spectrum. The goal, to accommodate broadband-sized channels and the modern applications broadband networks can support.

Then, in a March 2019 Notice of Proposed Rulemaking, FCC 19-18 in Wireless Telecommunications Docket 17-200, the FCC proposed to grant the petition. Setting out a new broadband channel plan, the technical rules for operating in those channels, and a process for transitioning to the new plan. The FCC established a sixty-day period for comments on its proposal, followed by thirty days for reply comments.

The commenters responding to the NPRM generally favored the proposal. Many highlighted the shortage of appropriate spectrum options for utilities seeking to operate broadband networks to support their operations. "That shortage is particularly acute in the rural areas," commented the National Rural Electric Cooperative Association. "Broadband spectrum is necessary to support deployment of smart grid technologies in rural areas, such as digital supervisory control and data acquisition systems ('SCADA') to remotely monitor and control substation and field devices, teleprotection to guard against potentially hazardous faults, distribution automation to intelligently route power through the grid, metering, video, security, and other applications."

Others, such as Duke Energy, stressed the importance of the spectrum for private networks, stating that "energy utilities have been forced to rely heavily on the broadband wireless services offer (sic) by commercial carriers. However, these commercial networks have not been designed and implemented to provide the robust and highly reliable mission critical communications services required by energy utilities. A private LTE system owned, operated and maintained by energy utilities for their exclusive use would improve both capacity and connectivity, and would provide such utilities with a wireless network that is inherently more reliable, more secure, and less susceptible to disruptions or other malicious activity than are the commercial services and other private network systems currently available."

In its final Report and Order, the FCC generally adopted its earlier proposal by creating two broadband channels of three megahertz each and making them available for use by critical infrastructure industries, including electric utilities. The FCC also adopted its proposed technical rules and process for implementing the new band plan.

With this action, "we provide a variety of 900 MHz users a new opportunity to leverage broadband capacity for more robust communication networks, especially for industries that provide crucial services to the American public," the Commission wrote in its Report and Order. "The record demonstrates that there is an ever-growing need by utilities and other industries for increased access to reliable broadband services [and that] businesses need wireless capacity that can accommodate a variety of applications to secure their operations against cyber security threats and natural disasters."

"The telecommunications methods, equipment, and networks of the 20th century are no longer up to the task of meeting 21st century climate conditions and security threats, not to mention the increasing complexity of administering the interconnected grids that make up the nation's electrical infrastructure," wrote Southern California Edison in comments to the FCC last spring. "SCE views the current proceeding as holding nothing less than the potential to have a defining, once-in-a-generation impact on the ability of utilities to continue to deliver safe and reliable power to their customers for decades to come."

Download a PDF of the complete Extra Edition here.